Info
FIFA Game News is an official media partner
of the FIFA Interactive World Cup 2016.
We will publish everything about this competition
and broadcast the most important matches.
Stay tuned to our website.

Al-Bacha was presented with his trophy by FIFA World Cup™ winner and New York City FC Captain, David Villa. The Dane also received a cheque for USD $20,000 and an invitation to attend FIFA’s annual awards ceremony for the world’s best football players, the FIFA Ballon d’Or in Zurich.

“To win the competition is beyond words for me. For the last few months I have really worked on my performance and was totally committed to playing the best I could here in New York. Being presented with the winner’s trophy by David Villa is amazing and I can’t quite believe this is reality yet,” said Al-Bacha.

In a thrilling two-legged final, with one leg played on PlayStation®4 and one on Xbox One, Allen played with Brazil before Al-Bacha swooped to victory playing as France. The 2016 edition marked the first time that the annual tournament was played on both the world’s leading gaming consoles – The PlayStation®4 and Xbox One. The new champion is the first FIFA Interactive World Cup Champion to ever win the event while playing on multiple platforms.

Speaking about Mohamad Al-Bacha’s win, David Villa said: “It’s been a real eye opener for me to see the level of competition here. The professionalism and mental strength in the final was just like in a real World Cup Final. I played a few of the competitors myself but I’m nowhere near their level. Congratulates to Mohamad Al-Bacha. He played a great match this evening and showed a real passion for football.”

The 2016 Grand Final, the twelfth edition of the tournament, was the first time that New York City had the pleasure of hosting the showpiece event. Over 2.3 million players from around the world took part in online qualification for the 2016 edition of the largest video gaming tournament in the world, but only an elite 32 players made it to New York.

Speaking about the event FIFA Marketing Director Thierry Weil said: “Tonight was a special night for everyone, in particular our new FIWC winner Mohamad Al-Bacha. His exceptional skills helped him to beat not only the 31 other participants in the Grand Final tournament, but also the people who registered for online qualification, and this is a huge achievement. I am very proud to see how this tournament has grown from the first event held at the home of FIFA in 2004 to the amazing performance we have witnessed this evening in New York.”

“When I scored in the 88th minute, I thought, ‘I just have to score another’,” Al-Bacha said after the final.

Harlem’s Apollo Theater is a classic music hall in New York City. Designed in a classical revival style, the venue was fit for a classic contest between the best gamers on the planet. Today it provided the stage for the Final Showdown of the FIWC 2016 Grand Final where Mohamad Al-Bacha emerged as champion of the biggest gaming tournament on the planet.

France’s Dylan Bance was the only semi-finalist going into Tuesday’s Final Showdown with past Grand Final experience, as he was in Munich last year. Al-Bacha, the youngest of the semi-finalists at the age of 17, was extremely impressive on Matchday 1 as he won all of his matches without conceding a single goal. The big question leading into the Final Showdown was: would anyone be able to score against the Dane?

Ivan Lapanje may not have been the favourite to win the competition for a lot of FIWC followers, but maybe we should have been listening closer to 2014 FIWC runner-up David Bytheway on Matchday 1, who, in an interview with FIFATV, picked Lapanje to go far in the tournament.

The coveted trophy was presented – and later handed to the winner – by FIFA World Cup™ winner with Spain, and current New York City FC forward David Villa. Villa’s presence symbolised the strong connection between the eSports community of FIFA and with the game itself, reinforcing the reality that everyone gathered in the Apollo were coming together in love of football, first and foremost.

“The players are playing very good, it’s so amazing,” Villa said. “Their abilities are amazing. They’re feeling a lot of emotions. I wish good luck to both of them!” Villa then had some last-minute advice to the finalists: “Take out the nerves, believe in yourself, find good luck and play strong.”

Al-Bacha selected France, while Lapanje, from Sweden, selected Brazil in the first semi-final. The first significant chance of the game was created by Lapanje who shot just wide, but Al-Bacha created a chance of his own in response, resulting in roars from the crowd. Both goalkeepers were in top form, making key saves early on. It was Al-Bacha who found the breakthrough, scoring with Antoine Griezmann. Lapanje created dangerous chances early in the second half, but Al-Bacha went two goals ahead after converting a penalty. Lapanje made it a real contest when he scored right on 90 minutes with a rebounded header by Douglas Costa, but it wasn’t enough in the end as Al-Bacha won the first semi-final 2-1. “I think France is a more well-rounded team than Brazil, so that’s why I selected them“, Al-Bacha told presenter Kay Murray afterwards, and he had some friendly words for his opponent in the process. “Lapanje is an amazing player and person, and he’s a lovely guy.” 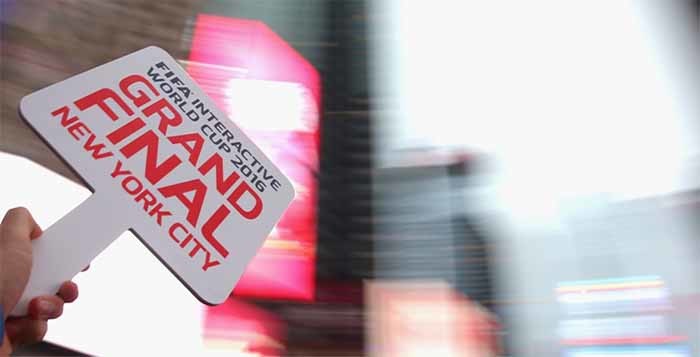 Sean Allen and Bance actually played each other in the group stages and Allen won comfortably 4-0, so the day’s second semi-final had an interesting psychological angle to observe. Allen played with Brazil, while Bance selected Germany, bringing back memories of that forgetful night for all of Brazil at Belo Horizonte during the 2014 World Cup. However, Allen’s performance showed he had none of those thoughts in his mind, as he was first to score in the 32nd minute with Neymar. Bance gave away possession too easily and Allen was able to capitalise in the end, scoring two late goals with Neymar, completing his hat-trick, and eventually winning 3-0. Allen showed all tournament long that he could score goals, so setting up a Final Showdown between himself and Al-Bacha meant it would be the best attack against the best defence.

In the title decider Allen was the higher seed, which meant, crucially, he got to select his console of choice in the first leg of the final. Interestingly, he opted to play the first leg with Playstation®4, his weaker console to, in theory, give him an advantage in the second leg. Al-Bacha went ahead first in the 31st minute, however, Allen responded just eight minutes later with a goal of his own with a player he counted on throughout the tournament, Neymar. The second half was a nervy one, but Al-Bacha eventually found the breakthrough with Matuidi. However, Allen scored minutes later with a composed finish from Hulk. Hugo Lloris made a huge save near the end to keep the score at 2-2, which meant Allen had the psychological advantage going into the second leg.

In the second leg, both players selected the same teams, but this time the match was played on Allen’s favoured Xbox One console. The Dane scored the opener, giving him a 3-2 aggregate advantage. However, Allen then struck back with a goal of his own when Hulk squeaked through a shot past the French defence. Allen scored again shortly after with a breakthrough goal from Douglas Costa to give him a 4-3 aggregate lead. Allen then scored another goal with Costa, who weaved his way through the defence to score the third of the game for Brazil. Al-Bacha then sent the crowd into hysterics when he scored in the 89th minute off a free-kick. Unbelievably, in what was the defining moment from the entire tournament, the Dane, having adapted an attacking 4-2-4 formation, scored a last-second goal to win the FIFA Interactive World Cup.

Football legends like Frank Lampard and Villa were involved in the Tournament Draw and Final Showdown respectively – just another sign of FIFA’s growing prominence in the football world. And the feeling here is, it will only get bigger and bigger.

There were professional footballers watching in the audience. FIFA.com spoke with New York Red Bulls defenders Damien Perrinelle and Ronald Zubar during the Final Showdown to get their observations on the event.

“The passion on show has been great to see,” Zubar said. “People really enjoyed the night. Obviously, FIFA has developed a lot in the last ten years and has taken over. It’s so realistic, sometimes it’s weird! You can see the players are tactically aware and they have a lot of fun with it.”

“To be a good player on the pitch can make you better at FIFA,” Perrinelle said. “You can read the game better than your opponent. But what I’ve seen from these players is that they have a very good tactical brain.”