The first FUT Champions Global Series event is almost here! The top 128 eligible FUT Champions* players will face off in one of the greatest football cities in the world, Barcelona, Spain from January 26-28, with the top 16 moving on to the Global Series playoff tournaments later this year.

This is the right time to make a Barcelona FUT Champions Cup Tournament Overview.

WHY SHOULD I WATCH?
The players participating in this tournament are the best of the best in FUT 18, and this year’s all-new format promises a highly-entertaining, competitive contest. It’s also the first Global Series qualifying event, which means that eligible competitors can still work their way up the FUT Champions Weekend League leaderboards in February and qualify for the next FUT Champions Cup tournament in April.

WHERE CAN I WATCH THE GAMES?
Spencer “Spencer FC” Owen, Chu “ChuBoi” Morah, and Jimmy Conrad are back to spearhead our broadcast team and to call all of the action live from Barcelona. Joining them this year will be Richard Buckley and Brandon Smith, an emerging powerful duo in the broadcasting scene alongside some of the best well-known faces from the FIFA community.

WHO WILL BE PARTICIPATING?
The top 128 competitors from around the world qualified for the FUT Champions Cup Barcelona by finishing at the top of the Global Weekend League Leaderboard back in November. The majority of the tournament is played against other competitors on the same console, but the Grand Final is played between the PlayStation 4 champion and the Xbox One champion.
Corentin “Vitality Rocky” Chevrey, last year’s FIFA Ultimate Team Championship Series champion, and FIFA Interactive World Cup 2017 winner Spencer “Unilad Gorilla” Ealing are just some of the well-known competitors that qualified for this tournament.
The full list of competitors to watch for in Barcelona can be found here.

WHAT IS THE TOURNAMENT FORMAT AND HOW DOES IT WORK?
EA are introducing a brand-new tournament format with this competition that is intended to increase the quality and quantity of matches, as well as ensure that only the best players move on from each stage.

MATCHES AND TIEBREAKERS
Each match will consist of 2 games between the same opponents. The winner will be determined by the aggregate score.
Throughout every stage of the tournament, including the Grand Final, if a match remains tied in aggregate score after the second game, there will be Extra Time and if needed, penalties will decide the winner.

GRAND FINAL
The final stage of the FUT Champions Cup is the Grand Final, a two-game round between the winners of the PlayStation 4 Division and the Xbox One Division. One game is played on each console and the player with the highest aggregate score after the two games will win the FUT Champions Cup Barcelona, and the US $22,000 prize. 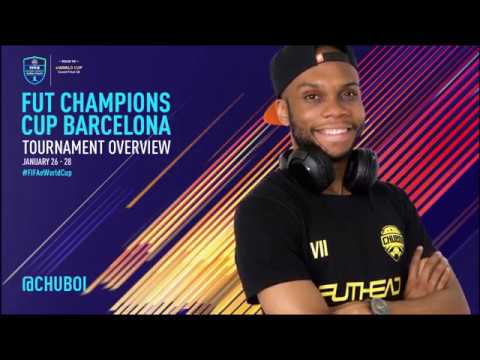