EA has revealed who are the best goal scorers from Barclays Premier League in FIFA 14.

It doesn’t need to mean that they are the best ones. On Ultimate Team, for example, there are much more cards of Torres than Aguero. And more cards means having more chances to score. Let’s see who are the ten Barclays Premier League players with more goals scored.

Position: 1
Name: DANIEL STURRIDGE
Position: ST
Nationality: England
Club: Liverpool FC
Summary: Liverpool FC players bookend our Top 10 BPL list and the 24 year-old Daniel Sturridge lands the top spot. The third BPL player to be featured in our Top 10 Transferred Attackers, Sturridge is a speed demon with 90 Sprint Speed and 89 Acceleration. Not only is he a popular striker, his signature goal celebration continues to be the most used one among all FIFA players.

Position: 2
Name: SAMUEL ETO’O
Position: ST
Nationality: Cameroon
Club: Chelsea
Summary: Regardless of the club he’s played for in the past, it’s hard not to like Samuel Eto’o. In his first season with Chelsea, his goal scoring prowess may not be fully formed yet but he’s still doing his part in keeping the club in the title mix. In FIFA 14, he puts the ball in the back of the net because he’s hard to catch. His 91 Sprint Speed and 90 Acceleration are deadly. Combine those with 88 Agility, 87 Dribbling and 85s in Jumping, Positioning, Finishing and Penalties, it’s no surprise that he can score from just about anywhere.

Position: 3
Name: CHRISTIAN BENTEKE
Position: ST
Nationality: Belgium
Club: Aston Villa
Summary: With so many Ultimate Team users clamouring to get their hands on Villa’s Benteke, it shouldn’t come as any surprise that he lands in the #3 spot on this list. The Belgium striker can score goals thanks in large part to his 90 Strength, which makes him difficult to take down. Like a few others on this list, he doesn’t necessarily stand out with really high skill ratings, but his 83 Finishing, 82s in Shot Power and Acceleration and 81s in Jumping and Sprint Speed do more than enough to make him a goal scoring threat. Also, he’s really good at FIFA 14.

Position: 4
Name: OLIVIER GIROUD
Position: ST
Nationality: France
Club: Arsenal
Summary: The sole Arsenal player to crack this list is Frenchman Olivier Giroud, the club’s leading scorer in the BPL. The 27 year-old striker lands on the list with 86 Strength, 85 Heading Accuracy, 84 Shot Power and 83 Finishing. He might not appear as flashy as some of the other players on this list, but Giroud is a fantastic option to have up front and quite affordable for Ultimate Team users needing an upgrade.

Position: 5
Name: FERNANDO TORRES
Position: ST
Nationality: Spain
Club: Chelsea
Summary: While Torres may not have the high skill ratings in comparison to others on this list, he is highlighted by 86 Volleys and 84s in Ball Control, Finishing and Shot Power. When coupled with a strong midfield and another attacking player, Torres is either scoring goals or making it easier for team mates to do the same.

Position: 6
Name: ROBIN VAN PERSIE
Position: ST
Nationality: The Netherlands
Club: Manchester United
Summary: Van Persie is a beast on volleys, thanks to his 92 Volley, 91 Finishing and 90s in Shot Power and Positioning. If he can properly connect with the ball, only the best keepers are going to save his shot. While it is unlikely he will repeat his fantastic 2012-13 campaign, RVP continues to put the ball in the back of the net for FIFA 14 users.

Position: 7
Name: SERGIO AGUERO
Position: ST
Nationality: Argentina
Club: Manchester City
Summary: Agüero is the second Man City player on this list and a goalkeeper’s worst nightmare. Right away, his 93 Acceleration makes him hard to stop, but when you combine that with his 90s in Ball Control, Dribbling, Finishing and Balance, even the best defenders will have a hard time marking him. Man City are the highest scoring club in the BPL right now and players like Agüero and Negredo are just two of the reasons why.

Position: 8
Name: ALVARO NEGREDO
Position: ST
Nationality: Spain
Club: Manchester City
Summary: The 83-Rated Negredo is just one of the many offensive weapons available at Manchester City. Highlighted by his 88 Shot Power, 87 Strength, 84 Finishing and 83 Ball Control, Negredo is a fantastic option when you need someone reliable within striking distance of goal.

Position: 9
Name: WAYNE ROONEY
Position: ST
Nationality: England
Club: Manchester United
Summary: Although Manchester United’s Wayne Rooney may not be scoring as many goals as he has in years past, but he is still currently the club’s leading scorer as well as their largest assist producer. If he can’t put one in the back of the net, he still manages to set-up his team mates. In FIFA 14, Rooney has one of the strongest shots in the game, as illustrated by his 91 Shot Power. His 89s Aggression and Volleys, 88 Stamina and 87 Finishing also justify his placement on this list.

Position: 10
Name: LUIS SUAREZ
Position: ST
Nationality: Uruguay
Club: Liverpool FC
Summary: Liverpool’s Luis Suárez is far and away the highest-scoring player in the Barclays Premier League this season, so it shouldn’t come as any surprise that he’s also scoring goals in FIFA 14, thanks to his 91 Dribbling, 88s in Ball Control and Reactions, and 86s in Acceleration, Agility, Stamina and Positioning. With Liverpool still very much in the title hunt, expect the club to rely on him to continue the goal-scoring. 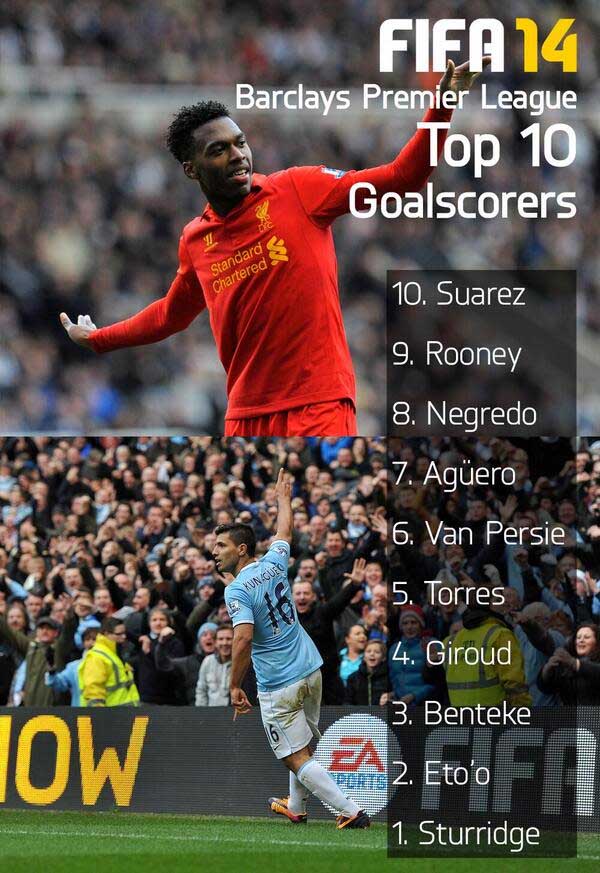