Donovan DhTekKz Hunt won the FUT Champions Cup Barcelona, the first trophy of the season. Let’s take a look at how he did it.

The first event in the FIFA 18 Global Series on the Road to the FIFA eWorld Cup wrapped up in Barcelona on Sunday, and the knockout stage was filled with drama and excellent gameplay. Catch up on all the action from the epic finale of the tournament. The FUT Champions Cup Barcelona started on Friday with 128 players, 64 each on PlayStation 4 and Xbox One, and on Sunday it finally came down to the two top competitors. After numerous favourites were slowly eliminated from the tournament, young newcomer Donovan “DhTekKz” Hunt from Great Britain and Nicolas “nicolas99fc” Villalba of Argentina faced off in the epic Grand Final.

About as surprising as his memorable run to the final was the way DhTekKz began this game: he scored just seconds after kickoff to secure an early lead. The young man scored two more goals and dominated for much of the first leg, but nicolas99fc organized himself near the end and pulled two goals back to make it 3-2 going into the second leg. It took a few more minutes than it did in the first leg, but DhTekKz again struck first on the big stage. Clearly frustrated at conceding late, he came into this second leg looking a bit nervous. But DhTekKz was a man on a mission. By the end of the first half of this leg, the young Englishman would score four more goals to snag an incredible 8-2 aggregate lead and create a veritable mountain for nicolas99fc to climb. The Argentine PlayStation 4 champion didn’t go quietly, striking first in the second half of this leg and giving himself the faintest glimmer of hope. But that would be nicolas99fc’s last goal of the tournament. DhTekKz would score one more goal to secure a 9-3 aggregate lead and lift the first FUT Champions Cup trophy of the year.

But today wasn’t just about the Grand Final. Each console bracket started with 32 players that managed to get out of the group stage, and each round of the knockout stage had drama, incredible goals, and plenty of surprises. A few players and storylines stood out and help explain how nicolas99fc and DhTekKz reached the Grand Final. 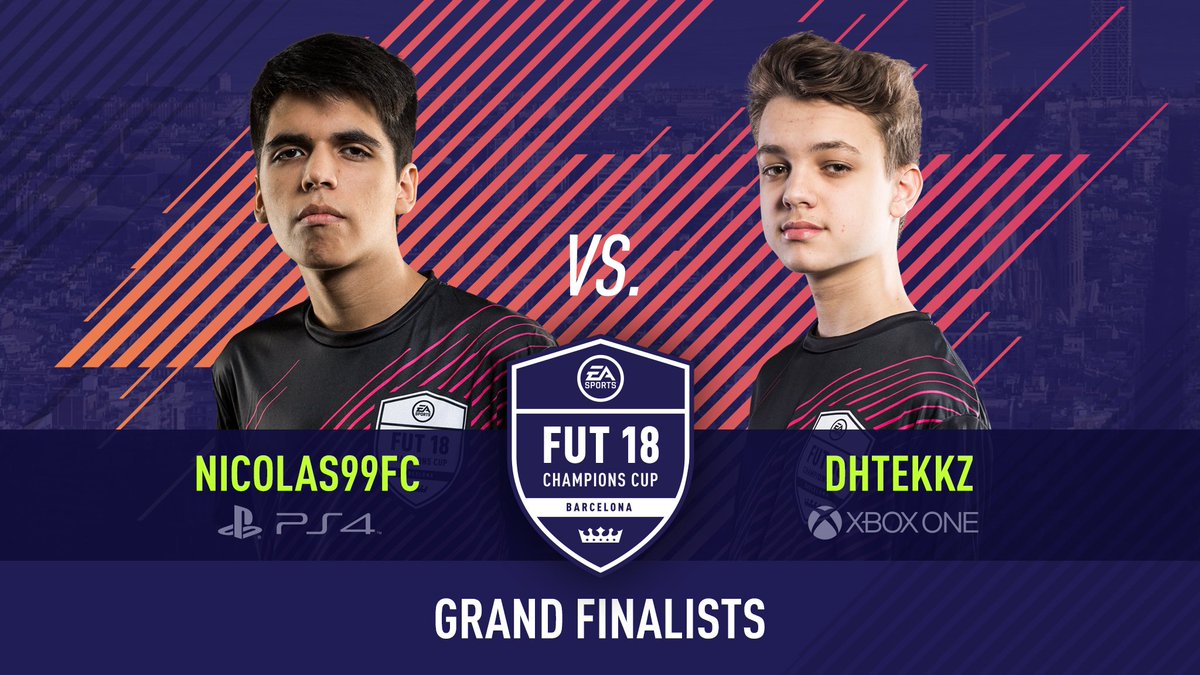 DHTEKKZ WAS A TRUE UNDERDOG
At just 16, DhTekKz came into his first major FIFA competitive event as the 55th seed on Xbox One. To say that nobody expected him to reach the Grand Final is an understatement. He had an impressive 5-2 record in the group stages, highlighted by his win over the reigning FIFA 17 Championship Series winner Corentin “Vitality Rocky” Chevrey. The young newcomer plowed through the competition in the knockout stages, dispatching world class talents like kurt0411 and top-seeded Megabit along the way. His utter dominance in the Grand Final was as entertaining as it was inspiring, and his story shows that anything is possible in the FIFA 18 Global Series.

SOUTH AMERICA HAD ITS CHAMPION IN NICOLAS99FC
In a tournament saturated with European talent, fans in the Americas had only a few names to root for in Barcelona. But only one player from the Western Hemisphere made it to the latter stages of the bracket: Nicolas “nicolas99fc” Villalba. The Argentine FIFA veteran faced the likes of August ‘Hashtag Agge’ Rosenmeier and Stefano “stefanopinna” Pinna en route to his Grand Final appearance. He might not have won the trophy, but nicolas99fc had a respectable tournament in which he made his enthusiastic fans proud. This is not the last we’ll see of him in the competitive FIFA scene.

THE GERMANS DOMINATED — UNTIL THEY DIDN’T
Not only did German players dominate the group stage of this tournament, they also made up half of the players in the semifinals of both consoles. But they all came up short, as no competitor from the bavarian country made it to the Grand Final. FC Basel pro Tim “TheStrxngeR” Katnawatos was a goalscoring machine for much of the tournament, but he was halted by nicolas99fc in the PlayStation 4 finals. Both German players in the Xbox One semifinals were dispatched by DhTekKz, including the top seeded player on the console, Michael “MegaBit” Bittner. It will be interesting to see if the German dominance continues in future events.

TOURNAMENT FAVORITES WENT OUT QUICKLY
VfL Wolfsburg pro Benedikt “Salz0r” Saltzer made a sensational run to the top of the group stage in this tournament, surprising everyone who had written him off as a has-been. But the veteran quickly became a tournament favorite a perfect record through the knockout stage—but he was sent crashing down to earth almost immediately in the Round of 32. Shaun ‘Shellzz Unilad’ Springette was the number one seed on PlayStation 4 and the runner-up in last year’s FIFA 17 Ultimate Team Championship Series, but he squeaked into the knockouts with a 4-3 record in the group stage. Shellzz didn’t make it much further, as eventual PS4 finalist Tim “TheStrxngeR” Katnawatos also sent him packing in the Round of 32.

WHO MADE THE PLAYOFFS?
The top eight players in each console division (those who reach at least the quarterfinals) booked their ticket to one of the FIFA 18 Global Series Playoff events later this year. The top eight PlayStation 4 players were: Testotier, StefanoPinna_21, mo_aubameyang, didychrislito, FCB TheStrxngeR, deto_official, YimmieHD, nicolas99fc. The top eight Xbox One players were: Sakul970611, NRaseck 7, VfL MegaBit1848, Janoz, Hashtag Ryan, Gorilla Unilad, DhTekKz, DreamR UK. This group will be joined by 56 more competitors on each console to continue their Road to the FIFA eWorld Cup in the upcoming FIFA 18 Global Series Playoffs in June.