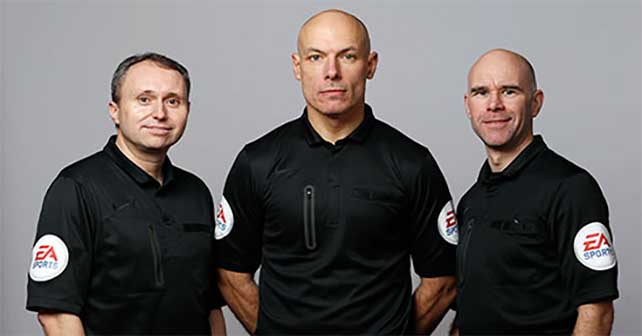 EA has signed a long-term agreement with Professional Game Match Officials Limited (PGMOL) where EA Sports becomes the new principal partner for PGMOL up until the end of the 2018/19 season. It means that Electronic Arts branding will be on referees kits from UK.

Electronic Arts Branding Will Be on Referees Kits from UK

Professional Game Match Officials Limited was formed in 2001 to improve refereeing standards. It is responsible for the training, development and mentoring of 77 referees and 231 assistant referees. Electronic Arts has signed a long-term agreement with PGMOL where EA Sports becomes the new principal partner for PGMOL up until the end of the 2018/19 season.

The first referee kit to feature the new EA Ssports branding will be on Monday 20 January in the Barclays Premier League match between West Bromwich Albion and Everton, with Michael Oliver the referee. Over the next week the kit will make its debut in the Capital One Cup and The FA Cup with Budweiser.

The partnership gives EA Sports access to about 2,700 professional football matches every season, with an estimated cumulative global TV audience in excess of five billion across all three major English football bodies that PGMOL works with, the Premier League, The FA and The Football League.

The partnership delivers a range of designation and promotional rights, including shirt-sleeve and training-wear branding on all professional match referees, assistant referees and fourth officials, branding and accreditation on all publicity material, all governing body websites, as well as PGMOL and refereeing inventory that offers extensive promotional opportunities. (…) We are very excited to have secured this long-term arrangement with EA Sports,” Mike Riley, General Manager of PGMOL, said. “They are a great fit for PGMOL given their deep connection with football. This is also good for the long-term development of refereeing in this country as it ensures we can continue to invest significantly in the training and development of officials at all levels of the game. (…) EA Sports joins PGMOL at an exciting time. A huge amount of work has gone into improving refereeing performance in recent years. There has probably never been as much scrutiny of refereeing as there is now, but we are very proud of the fact that the accuracy of the Select Group in major decision-making, their Match Delegate marks and fitness has never been higher. “We have an incredibly dedicated and professional team that features some of the world’s leading officials and many who will go on to excel at the highest level.”.

David Rutter, Executive Producer for the FIFA franchise at EA Sports, said: “This is an exciting new partnership for EA Sports and our millions of fans. Our FIFA games are built on connection to the real-world of football, and having the top-tier referees and officials carrying the EA Sports brand into matches each season is a great extension of this connection.”