The FUT Champions Cup Manchester kicks off on April 13 at the Victoria Warehouse in Manchester, UK. Let’s find out who are the favourites to win this competition.

The FUT Champions Cup Manchester takes place on April 13–15 at the Victoria Warehouse in Manchester. See below for the schedule and how you can watch the tournament from anywhere in the world.

Mohammed “Mo_Aubameyang” Harkous
“Mo Aubameyang is one of the most consistently high-placing FIFA players in the game at the minute: he had top four finishes in London last year at the FIWC grand final, that accompanied by another top four finish in Barcelona and a win at the Draft Story Cup recently put this man as a stand out favourite when it comes to the PS4.”

Christopher “didychrislito” Holly
“Chris secured a place in the playoffs earlier on in the year with a solid top eight finish in Barcelona. However, I know that this man wants to win a major title in FIFA; he seems like he’s always the bridesmaid and never the bride, so will Manchester be his big day? He certainly has the game for it to be, and I believe he’s much more mentally strong now, so he will be a tough task for anyone he faces.”

Kai “deto” Wollin
“I often speak of players who perform well over long periods of time with LAN experience, and this man has it in abundance. He was in the FIWC grand final last year, and he’s a former World Cyber Games champion. Deto knows how to perform on a big stage. He has recently joined Manchester City, so he’ll not only be playing for himself but also the fans in Manchester, trying to bring back a trophy for the blue side of the city.”

Edi Garibovic
“This right here is my outsider, I’m not saying he’s going to win the entire competition but just watch for him to cause a few upsets on Friday, and if he starts replicating the form he can show at home then who knows, we could have another DHTekkz on our hands. Garibovic is also a UK resident, so there’s that little more edge to want to perform in your own country and put on a show for the fans in attendance and online.”

Nicolas “nicolas99FC” Villalba
“You cannot compile a list of the players to watch going into an event this year without having Nicolas among that list. The man is a machine; it’s as simple as that. When he’s playing FIFA there is zero emotion coming from him. He is in the zone and he has one goal on his mind . . . to win! He was runner-up to DHTekkz in Barcelona in January and will be aiming to go one better in Manchester.” 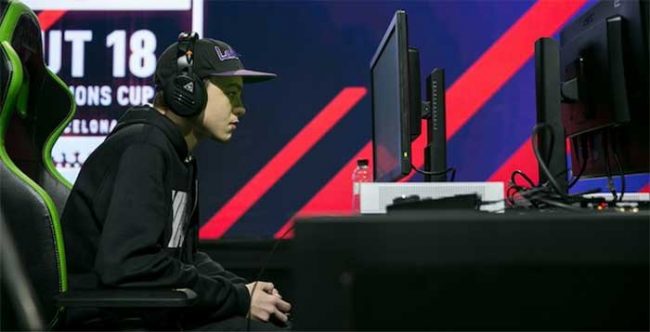 Donovan “DhTekKz” Hunt
“I think you have to start with the most recent Champ from the Barcelona FUT Champions Cup. To achieve what this player did over such a short period of time was incredible! From his social media growth, to his skill set on the field — he is a player who continues to impress. They say in the pro scene that one of the biggest differences between those at a good level and those at an elite level is unpredictability. DhTekKz is probably one of the most unpredictable players I have ever watched, one minute he brings out an El Tornado and the next he is making elite players look silly with some of the most complex skills in the game. Will he be able to compete now he’s back on his own home soil? Let’s see — but I have a good feeling he is ready to perform!”

Spencer “Unilad Gorilla” Ealing
“I don’t think you can look at any FIFA event these days and say Gorilla will not be a favourite to go and win. If you look over the past few years, this man has built up his own legacy within the FIFA scene — from competing in Gfinity to winning FIWC 2017, this guy knows how to play FIFA. Whenever there is a top-flight competition to qualify for or to compete in, you can ensure that he will be there and put on a show by making the final stages at every event. Gorilla is one of those few players who has a mindset like no other, all he wants to do is to keep on winning and battling to be the best there has been in FIFA.”

Javier “Janoz” Munoz
“In my opinion one of the most underrated players in the competitive FIFA scene, he has been to some of the biggest events in FIFA and has always put on a show. From losing in the grand final of the FIWC back in 2011 in Los Angeles, Janoz has learned how to compete against some of the best, as we saw with his impressive display in Barcelona, which earned him a playoff spot. Some players and commentators have even said that they have never seen someone play FIFA the way this guy does. He brings a different type of play style from the Americas region, but he is happy to face anyone to show that he can be the best in the world — not just Colombia.”

Nathan “M_Herozia” Gil
“A big name not only in the French FIFA scene, but in the wider world of competitive FIFA. Herozia has been involved in some of the biggest FIFA events to date, and has had success in his own backyard via the highly impressive Orange Ligue 1. Playing competitive FIFA in France is no walk in the park, since the skill level is so high. However, this Frenchman is still young and he is on a journey. I would give him only a few more years or major events, before he becomes one of the household names in France for competitive FIFA.”

Nicolas “NRaseck” Raseck
“One of those players that just goes about their business quietly in the scene, but pop ups up at big events and plays FIFA at the highest level. The German pro was only a win away from becoming the Xbox Champion in Barcelona in January before falling to eventual champion DhTekKz. It’s important to remember that he is coming from a very competitive German FIFA scene, in which the talent pool across the nation is unbelievable. Nicolas Raseck was one of those few players that hit the ground running last year with the addition of the FUT Champions format, making it to the Berlin FUT Champions Finals and impressing many. I think he will look to continue impressing in Manchester, and I cannot wait to see how his FIFA will do the talking.”