The MLS All-Star Forward will be decided by the FIFA 13 community by scoring goals with them. Find out how it works.

Major League Soccer launched fan voting to determine the “All-Star Fan XI” for the 2013 AT&T MLS All-Star vs. AS Roma. This year, beyond the usual digital voting platforms (online, text message, and Twitter), MLS is incorporating an innovative integration of game play on EA SPORT FIFA Soccer 13, into the fan voting process.

FIFA 13 Community can choose from a pool of 115 players, who were nominated by members of the media. The 10 players with the highest combined votes from the three traditional voting methods will be named to the All-Star Fan XI.
The 11th player, a forward, will be decided after the general voting window closes on July 2, as part of what is called the AT&T MLS All-Star “In the Game” Challenge. Among remaining forwards on the ballot, the player with whom fans score the most goals in EA Sports FIFA Soccer 13 from July 3-July 10 will be named to the Fan XI.

The first 10 players voted to the Fan XI will be announced on Sunday, July 7, on ESPN during halftime of the Chicago Fire-Sporting Kansas City match that kicks off at 3 p.m. ET. The AT&T MLS All-Star “In the Game” Forward will be unveiled on July 11, after the play-in period finishes. The rest of the MLS All-Star team will be selected by the coach, Sporting KC’s Peter Vermes, and MLS Commissioner Don Garber, who is allotted two Commissioner picks each year. Vermes will select the game day roster and starting XI for the July 31 match at Sporting Park in Kansas City.

Voting for the AT&T MLS All-Star “In the Game” Forward will then take place using FIFA Soccer 13 on Xbox 360, PlayStation 3 and PC. Fans will be invited to play the game and score as many goals as possible with their favourite player among the remaining eligible forwards. Each goal scored will count as one vote. The player who tallies the most goals will be named to the final spot on the Fan XI.

There are 25 players eligible to be the MLS All-Star Forward which include: 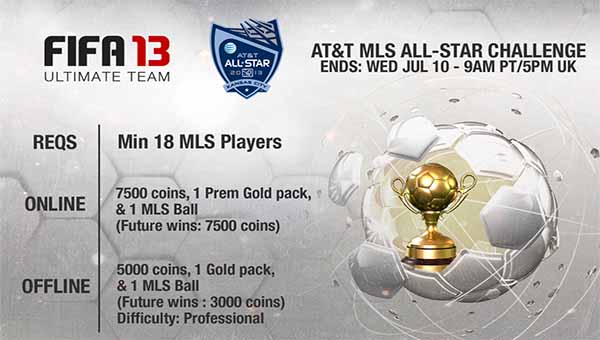 To make things even more interesting, EA Sports launched a new tournament named “MLS All-Star Challenge”. The online prize to the first win is 7,500 coins, one Premium Gold pack and one MLS ball.