The new Team of the Week was released. Check out who is in the FIFA 13 Ultimate Team TOTW 29.

The biggest highlight is the SIF Robben that will cost a fortune. SIF Gervinho is also a very good addition since he now plays as RM, making him probably the best BPL player in this position (only IF Mata can be better but his price is too high). SIF Piszczek and SIF Vertonghen are the other two players that fits very well in top squads.

Check it out the staring eleven of this FUT 13 Team of the Week 29:

The substitutes of this FIFA 13 Ultimate Team TOTW 29 are: 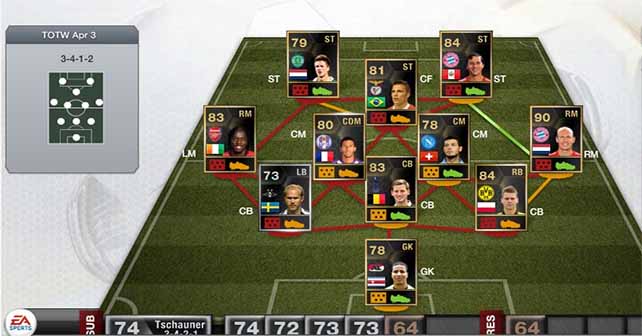 The TOTW 29 IF players will be available in packs only from 6pm UK April 3rd 2013 until 6pm April 10th 2013. You can play against them on the ‘Team of the Week Challenge’ section within FIFA 13 Ultimate Team on your console.