The new Team of the Week was released. Check out who is in the FIFA 13 Ultimate Team TOTW 30.

The main highlights are the IF Fàbregas and IF Di Natale that will cost a fortune. The Spanish will be one of the most wanted players and some gamers can buy him to place as ST. The Italian is probably the best striker of Serie A. Now, he is even better with this improved rating of two points.

But there are more popular players in this TOTW, specially from BBVA. Sánchez IF is now a good option to Di Maria and Navas place. Xabi Alonso, who was in the TOTY, is now more special with this In Form version. In the goal, Neuer is now the second best goal keeper of whole FIFA 13 Ultimate Team.

Check it out the staring eleven of this FUT 13 Team of the Week 30:

The substitutes of this FIFA 13 Ultimate Team TOTW 30 are: 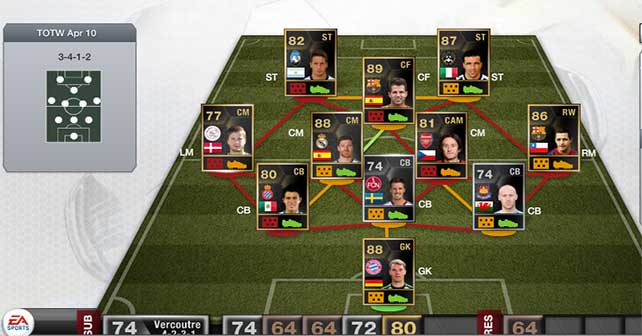 The TOTW 30 IF players will be available in packs only from 6pm UK April 10th 2013 until 6pm April 17th 2013. You can play against them on the ‘Team of the Week Challenge’ section within FIFA 13 Ultimate Team on your console.