The new Team of the Week was released. Check out who is in the FIFA 13 Ultimate Team TOTW 35.

The main highlight of this TOTW 35 is Frank Lampard. The English player scored twice against Aston Villa in the last weekend and showed to everyone that nobody is too old to play.

Andrés Guardado, one of the fastest players of BBVA is now a very good choice to LB, his new position. If you do not like Marcelo or Alba, it is your chance to get that left back to your La Liga squad.

This TOTW has another fast player that now is much faster: Kevin Mirallas. The Belgium, that plays on Everton, is now RM. As everyone knows, the problem of BPL teams is exactly this position. With this IF card, there is more quality choices.

Our last highlight goes to Jérémy Ménez. He has a new position too: ST. The French player scored the only goal of PSG win against Lyon and helped his team to become French champion.

Branimir Hrgota, another striker, that plays in Borussia M’gladbach, was the player with the higher improvement this week: 6 points!.

Check it out the staring eleven of this FUT 13 Team of the Week 35:

The substitutes of this FIFA 13 Ultimate Team TOTW 35 are: 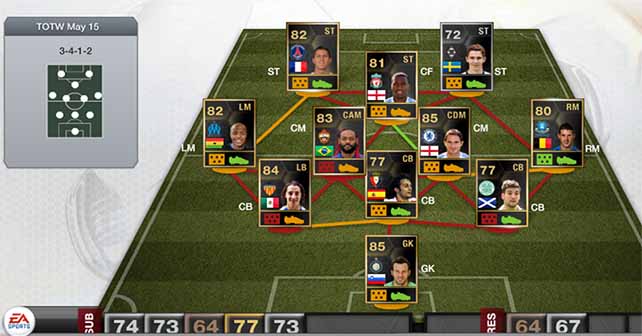 The TOTW 35 IF players will be available in packs only from 6pm UK May 15th 2013 until 6pm May 22th 2013. You can play against them on the ‘Team of the Week Challenge’ section within FIFA 13 Ultimate Team on your console.