The new Team of the Week was released. Check out who is in the FIFA 13 Ultimate Team TOTW 38.

The main highlight of this TOTW 38 is Negredo. Now, he is the fourth striker with higer rating, playing in the BBVA. The Spanish player got his second In Form cards, being now one of the best choices for your BPL team on the attack thanks to his shooting and his heading attributes.

Diego Costa got his first IF card of FUT 13. He scored two goals against Real in the last weekend and helped his team to win the Spanish Cup.

Two the players of these TOTW 38 got a great improvement: 10 points to Christopher Forrester, that plays in ST. Patrick’s Athletic, and 9 points to Diego Fagundez, that plays in New England Revolution.

Final note to the Brazil League. Three of the players of this TOTW, play in this country.

Check it out the staring eleven of this FUT 13 Team of the Week 38:

The substitutes of this FIFA 13 Ultimate Team TOTW 38 are: 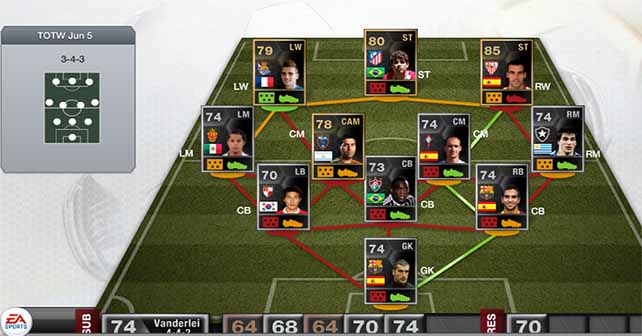 The TOTW 38 IF players will be available in packs only from 6pm UK June 05th 2013 until 6pm June 12th 2013. You can play against them on the ‘Team of the Week Challenge’ section within FIFA 13 Ultimate Team on your console.