The new Team of the Week was released. Check out who is in the FIFA 13 Ultimate Team TOTW 39.

The main highlight of this TOTW 39 is Ronaldinho. He already had one TOTW card but in this new one all his six main attribute were improved, specially the shooting in four points. He still has bad work rates (low/low) but he is one of the fews with 5 star skills and 4 weak foot.

Final note to the number of position changes in this TOTW 39: 10! It was the first time it happened.

Check it out the staring eleven of this FUT 13 Team of the Week 39:

The substitutes of this FIFA 13 Ultimate Team TOTW 39 are: 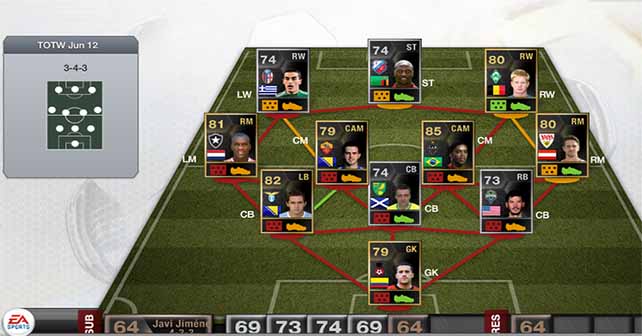 The TOTW 39 IF players will be available in packs only from 6pm UK June 12th 2013 until 6pm June 19th 2013. You can play against them on the ‘Team of the Week Challenge’ section within FIFA 13 Ultimate Team on your console.