The new Team of the Week was released. Check out who is in the FIFA 13 Ultimate Team TOTW 40.

The main highlight of this TOTW 40 is Dominic Oduro. He is now the fastest silver striker of MLS, with an impressive pace 94 and agility 95. His 6’1 of height are a waste for so poor heading. But he is a very good option to a striker of a MLS pacey team.

But this TOTW 40 has other good cards: Moises Hurtando is now the silver CB with the best defending on Liga Adelante; Kenny Miller, the Scottish striker that plays on Whitecaps has the best is shooting among all silver players from that League; on Ireland, Joseph N’Do IF has the best passing and shooting of all bronze CM’s; and finally, Soriano, his poor dribbling and pace are hidden by an amazing strength, shot power and height (6’3).

John Sullivan, right back from Dundalk, got the highest improvement: 11 points.

Check it out the staring eleven of this FUT 13 Team of the Week 40:

The substitutes of this FIFA 13 Ultimate Team TOTW 40 are: 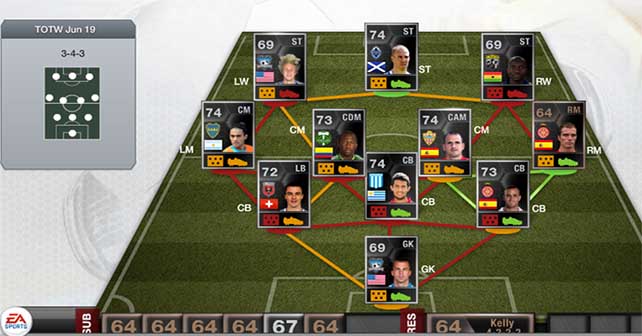 The TOTW 40 IF players will be available in packs only from 6pm UK June 19th 2013 until 6pm June 26th 2013. You can play against them on the ‘Team of the Week Challenge’ section within FIFA 13 Ultimate Team on your console.