The new Team of the Week was released. Check out who is in the FIFA 13 Ultimate Team TOTW 41.

The main highlight of this TOTW 41 is Jo Inge Berget. With his new IF card he has now an even better agility, shot powers, strength and skills. Another great choice to take free kicks is Michael Barrantes. The CM from Costa Rica has also rating 74 and an amazing +85 in curve and shot power attributes.

In a TOTW with four players from USA and with six players from Scandinavia, nobody got an improvement higer than 4 points.

Check it out the staring eleven of this FUT 13 Team of the Week 41:

The substitutes of this FIFA 13 Ultimate Team TOTW 41 are: 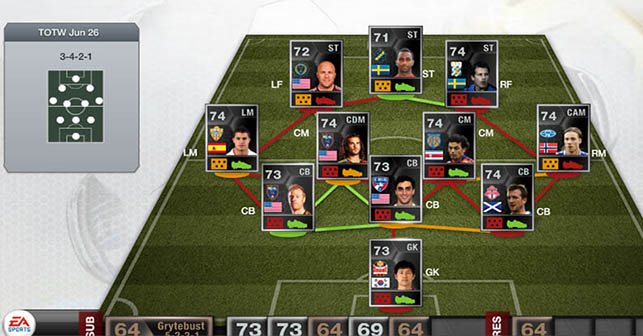 The TOTW 41 IF players will be available in packs only from 6pm UK June 26th 2013 until 5:30pm July 03rd 2013. You can play against them on the ‘Team of the Week Challenge’ section within FIFA 13 Ultimate Team on your console.