The new Team of the Week was released. Check out who is in the FIFA 13 Ultimate Team TOTW 45.

The main highlight of this TOTW 45 is Juninho. He is the best choice to take free kicks thanks to his wonderful stats: 99 free kicks, 95+ curve and 95+ long shots. He is a really good choice not only to take free kicks. He is also a excellent CAM, with passing 88 and ball control +95.

Juninho is not the only great card from this TOTW. Aiden McGeady, for example, is a great IF card. Great work rate (H/M), wonderful agility, aggression and dribbling, fast as the wind and with 5 star skills and 4 star weak foot. He is good or what?!

Juninho, the CAM from Vasco da Gama, was the player with the greatest rating improvement: 5 points.

Check it out the staring eleven of this FUT 13 Team of the Week 45:

The substitutes of this FIFA 13 Ultimate Team TOTW 45 are: 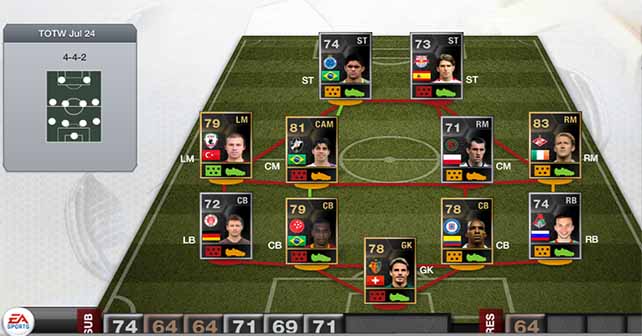 The TOTW 45 IF players will be available in packs only from 6pm UK July 24th 2013 until 5:30pm July 31st 2013. You can play against them on the ‘Team of the Week Challenge’ section within FIFA 13 Ultimate Team on your console.