The new Team of the Week was released. Check out who is in the FIFA 13 Ultimate Team TOTW 46.

The main highlight of this TOTW 46 is Igor Akinfeev. He is for sure one of the best goalkeepers of the game. And it is easy to understand why: all his stats, except speed, are higher than 80. In fact, the two most important attributes in a GK, diving and reflexes, are both 92.

Akinfeev is not the only great card from this TOTW. Elias, for example, is a great IF card. Great work rates to a box-to-box player (H/H), wonderful agility, shot power and strenght.

The othet goalkeeper of this TOTW, Richard Brush, was the player with the greatest rating improvement: 8 points.

Check it out the staring eleven of this FUT 13 Team of the Week 46:

The substitutes of this FIFA 13 Ultimate Team TOTW 46 are: 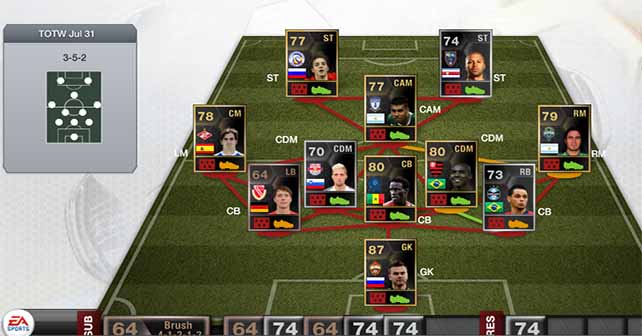 The TOTW 46 IF players will be available in packs only from 6pm UK July 31st 2013 until 5:30pm August 07th 2013. You can play against them on the ‘Team of the Week Challenge’ section within FIFA 13 Ultimate Team on your console.