The new Team of the Week was released. Check out who is in the FIFA 13 Ultimate Team TOTW 47.

The main highlight of this TOTW 47 is Danny. The new card of the Portuguese that plays by Zenit has some amazing stats: 90+ on ball control, short passing and dribbling. He will be for sure one of the most expensive cards of this TOTW.

If you think that speed is not much important in a Goalkeeper, you may try Diego Cavalieri. He is now one of the best GK of the Brazilian league. There is another player that can be interesting: Tore Reginiussen. Everyone knows that CB’s are not specially fast, but this one has pace 73. But he has another great skills: 90+ marking and shot power, 85+ standing tackle and 85+ strenght.

Bashkim Kadrii, a Danish striker that plays by Odense, was the player with the greatest rating improvement: 7 points.

Check it out the starting eleven of this FUT 13 Team of the Week 47:

The substitutes of this FIFA 13 Ultimate Team TOTW 47 are: 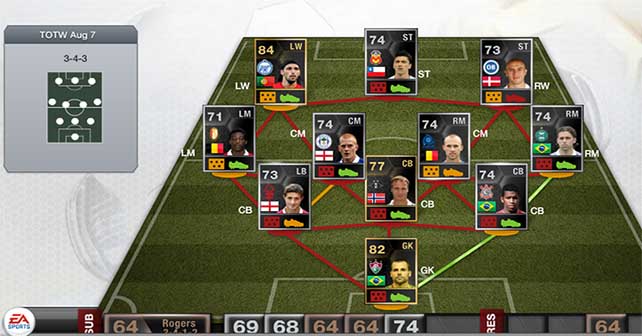 The TOTW 47 IF players will be available in packs only from 6pm UK August 07th 2013 until 5:30pm August 14th 2013. You can play against them on the ‘Team of the Week Challenge’ section within FIFA 13 Ultimate Team on your console.