The new Team of the Week was released. Check out who is in the FIFA 13 Ultimate Team TOTW 48.

The main highlight of this TOTW 48 is Landon Donovan. It is the first card of this player as striker. Now, he is the best choice to the attack of any MLS team, excepting the TOTS cards (from himself, Di Vaio and Thierry Henry). Besides the improved pace (89), he has amazing shot-power, curve and finishing.

But the most wanted card of this TOTW 48 may be another one. For everyone that needs a fast Bundesliga RM, the new card of Pierre-Emerick Aubameyang seems to have fallen from the sky. He is usually a striker but in the first round of the new season he played as Right Midfield. It’s truth that his balance is poor but he has another great stats: finishing 95+, acceleration 95+ and shot power 85+.

Another RM, Conan Byrne, that plays by ST. Patrick’s Athletic, was the player with the greatest rating improvement: 7 points.

Check it out the starting eleven of this FUT 13 Team of the Week 48:

The substitutes of this FIFA 13 Ultimate Team TOTW 48 are: 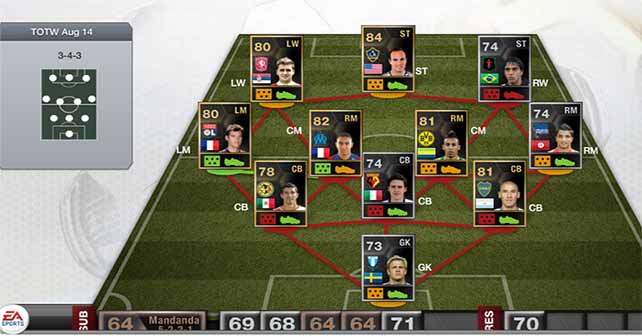 The TOTW 48 IF players will be available in packs only from 6pm UK August 14th 2013 until 5:30pm August 21st 2013. You can play against them on the ‘Team of the Week Challenge’ section within FIFA 13 Ultimate Team on your console.