Do you have a question about the FIFA 14 Creation Centre ? Find the answer here!.

What is Creation Centre?
Creation Centre is a free-to-play mode that allows you to enrich your FIFA 14 experience. Create a player and customize everything from their appearance and accessories to attributes and behaviors. Create teams using players you, or anyone else has created, and assign formations and tactics to them. Place teams created by yourself or anyone else in a Tournament (League) that can be used in Career Mode within FIFA 14. Even if you don’t create your own player, you can search on the web for your favorite players, teams, and tournaments and add them to Creation Centre.

What does Bookmark mean and what does it do?
Bookmark means that you are selecting a Player, Team, or Tournament for download. Once you have bookmarked any teams and players they will appear inside the Creation Centre Gallery in FIFA 14 where you can download them. 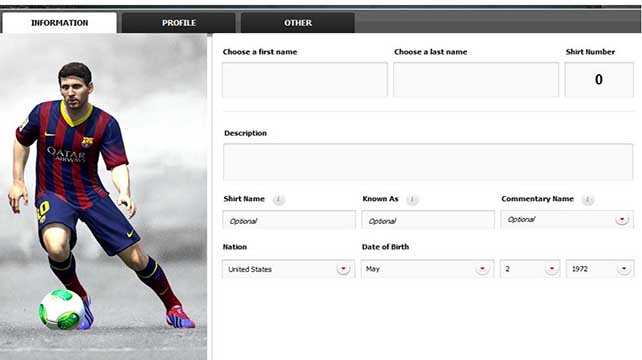 How many Players, Teams and Tournaments can I create?
You can create 100 Teams, 100 Players and five Tournaments.

Where can I see all the Teams I’ve Created and/or Bookmarked?
On the Creation Centre Home Page, there is a ‘Go’ button for players, teams, and tournaments. Clicking these buttons will take you to the Creation Centre Gallery where you can view the teams and players you’ve created and bookmarked, and search for teams and players created by other people.

How do I select a Player, Team, or Tournament I have created so I can download it into FIFA 14?
Go into the Gallery and click on the Team or Player you want to download. At the top of the page you will see a big red box that says ‘Bookmark’. When you click bookmark, the Team or Player will then be available to download into FIFA 14. Likewise there will also be a small white tag in the top left corner of each of the teams and players cards that appear in one of the website’s viewing galleries. Clicking on this tag will make it turn red, and also bookmark it so that it becomes available for download.

Where can I use my Created Players, Teams, Tournaments and Leagues after I have downloaded them?
Created Players can be found in the Free Agent Pool in the Club Transfers screen. From there they can be transferred to any regular FIFA 14 Team for use in any game mode where Customised Squads are allowed.
Created Teams and Leagues will appear under the nation ‘Creation Centre’ in any game mode where Customised Squads are allowed. This includes Online Friendlies, Online Custom Matches, Kick Off, Tournament Mode, and Career Mode. As mentioned above, use of Created Teams and Leagues in Career Mode is only offered to EA Sports Season Ticket Holders, or users that have purchased the appropriate downloadable content from the FIFA 14 Store.
Carrying over from FIFA 13, users will be able to create Leagues, Knockout and Group Knockout Tournaments on the Creation Centre Web App that they will be able to bring into FIFA 14’s ‘New Tournament’ Game Mode.

These teams and players will not appear for download in FIFA 14, but you will be able to update them to FIFA 14 players, and teams on the website!

How do I share a Squad online?
When viewing a created Team, Player, or League/Tournament on the website, there is a ‘Share’ button. Clicking on this button will provide a URL that you can then send to your friends. There are also Twitter and Facebook links that your friends can click on. When someone clicks on the URL, they will be able to view your Player, Team, or Tournament.

What Flash version is needed to access Creation Centre?
It is recommended that you download the latest version of Adobe Flash Player.

What languages can I access Creation Centre in?
English, French, German, Italian, Spanish, Dutch and Polish.

Does Creation Centre require users to have an XBOX Live Gold Account in order to use their created Teams and Players in game?
No. Source: EA Website