Amazon and Game are selling PS4 Bundles with FIFA 14 included. Find all the details here.

FIFA 14 Included in PS4 Bundles Sold by Amazon and Game

Great news for FIFA ans Playstation 4 fans! Amazon and Game are selling PS4 bundles and FIFA 14 is one of the games included.

If you live in Europe, you probably already know that FIFA 14 will be free with every pre-order of the Xbox One Day One Edition, while stocks last. It is the best choice for who wants to buy the new XBox and FIFA 14. But what about Playstation 4 users ?

We have waited a lot for this news but finally Amazon and Game have announced this week that they will sell PS4 Bundles with FIFA 14 included.

Amazon doesn’t have (maybe in the future) a PS4 bundle only with the console and FIFA 14. They are selling an unofficial bundle with Killzone, FIFA 14, two controllers and a PS4 Camera by £469.99. It is £20 than the original price. For who likes both games, it may be a very good option. Here are the PS4 bundles that are being sold by Amazon:

At this time, these bundles are only available to those who pre-ordered a PlayStation 4 from Amazon before August 7, with earlier pre-order customers given priority. 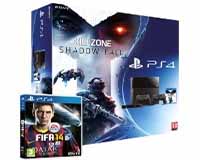 For who prefer to buy it on Game, they have revealed six PS4 bundles it is offering to Phase 1 PS4 pre-order customers. Customers have the option to stick with their regular PS4 at £349.99 or to choose from the following:

Buying a PS4 bundle is the right choice for those who are thinking buying the console and the game. It is much cheaper to do it together. If you are thinking to buy it on Amazon UK, do it through the links of this page. You will be helping us.