The world enters a new era of sports video games with the launch of the Xbox One and PlayStation®4 this November. FIFA 14 on next gen consoles feels alive with players who think with human-like reactions and anticipation and move with the agility of world class athletes. Innovative features such as Elite Technique, Pro Instincts, and Precision Movement, deliver the most authentic football experience possible. Fans will also experience the electricity of a living stadium as the emotions of new 3D crowds rise and fall around the stories on the pitch.

Thanks to the power of the new consoles and the EA Sports Ignite engine, FIFA 14 includes more than 1,000 new animations which create hundreds of new skills and behaviours. New touch passes, slices and lobs have been added, along with behaviours like off-balance shots, panic turns, missed shot reactions and more.

And for the first time ever in the FIFA series, multiple players can compete for balls in the air. Not only will there be situations where three or four players can all vie for ball, but each will also have greater control with a variety of new headers. Players will be able to adjust the power, angle and direction of the header as they contest for the ball.

Players make decisions four times faster than on previous consoles. Decision-making is now based on multiple frames per second, resulting in players that are more aware of their surroundings and react accordingly. Depending on the situation, an attacking player may check his run, back into a defender or brace for an incoming tackle. During a sprint, a player may feint or leap over a sliding defender while still maintaining possession of the ball. Defenders will recognize more opportunities to support and pressure the opposition to help create balance.

Gameplay will be dynamic and continuous in FIFA 14 on next-gen consoles. Players will actually interact with sideline characters throughout the match, rushing towards ball boys if the clock is winding down late in the match. In the build-up to corners, players will jockey for position in the box. 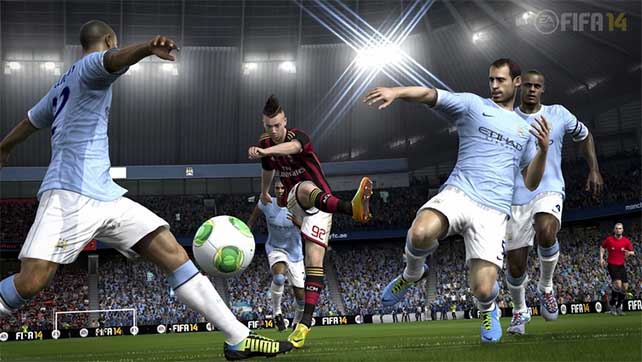 In FIFA 14, game play is built around True Player Motion and delivers a whole new feel in the game. Players will have unique step animations instead of blended run cycles, which means that every step counts. Foot slides have been eliminated and players will use true bio-mechanics to shift their weight from one leg to the other as they run. This dramatically changes the feel, look and realism within the game as players will be more grounded as they move across the pitch.

Players will gradually gain or lose speed as they run but will still have a burst of speed available. Using it incorrectly or relying on it too much may prove costly. Momentum is preserved while sprinting, so there’s a balance to ensure each match still feels authentic. And more player personality will be visible in the way each player moves around the pitch.

Nothing compares to a stadium full of fans cheering in unison. With FIFA 14, the crowds come to life with 3D crowd technology that completely changes the atmosphere of a match and makes every stadium feel alive.

The all-new In-Game Director will make each game of FIFA 14 on next-gen consoles feel like a match from the real world. Over 120 different broadcast cameras are positioned around the pitch, each following different players to build story lines and provide stunning new replay angles. You’ll even be able to trigger a replay of a previous important moment during any stoppage of play.

FIFA 14 on the new consoles features a new default camera that is angled lower and closer to the pitch to bring new 3D crowds life. The crowd is now a part of the action. Fans will react to the action on the pitch, ebbing and flowing with the action and emotion of each match. Larger stadiums in FIFA 14 will also feature stadium exteriors and broadcast-inspired stadium fly-overs to add more depth to the match-day experience.

The EA SPORTS IGNITE engine allows for greater graphical fidelity. New cloth technology ensures player kits look and react to movement just as they do in the real world. Particles of grass and dirt, and even splashes of water will be visible during matches. All of the enhanced detail helps each match tell a compelling story, on and off the pitch. 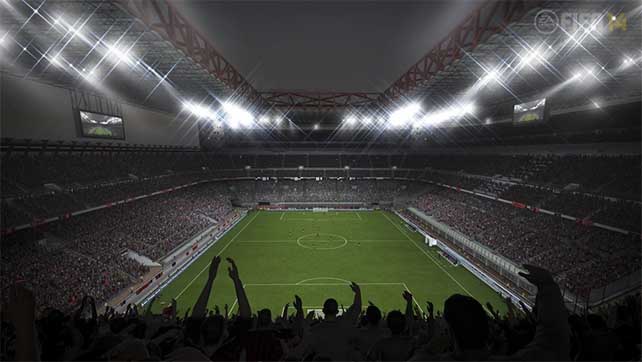