The second Team of the Week was released. Check out who is in the FIFA 14 Ultimate Team TOTW 2.

The main highlight of this TOTW 2 is Sergio Aguero. He is one of the best strikers of the game. last weekend he scored two goals against Manchester United. Who also have scored twice was the other ST of this TOTW 2, Diego Milito. He scored twice on his long-awaited return from injury as Inter Milan humbled promoted Serie A strugglers Sassuolo 7-0 on Sunday.

Acorán, that plays by SD Ponferradina , was the player with the greatest rating improvement: 3 points.

Check it out the starting eleven of this FUT 14 Team of the Week 2:

The substitutes of this FIFA 14 Ultimate Team TOTW 2 are: 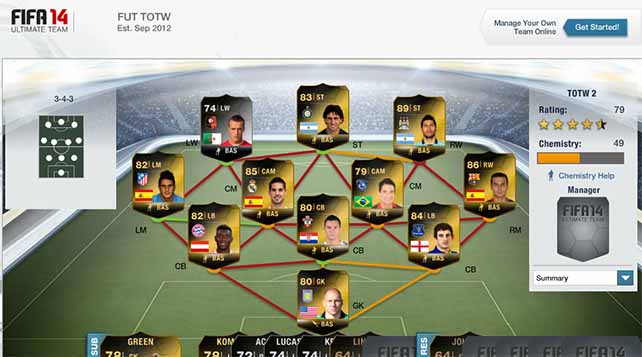