A new Team of the Week was released. Check out who is in the FIFA 14 Ultimate Team TOTW 29.

Atlético de Madrid managed to win a hard fought match over Athletic Bilbao 1:2 on Saturday to maintain their single point lead atop the Primera Division. Although the hosts took the lead after only seven minutes, Atlético’s leading scorer Diego Costa tied it up in the 22nd. Teammate Koke would score the match-winner in the 55th to give the club the three critical points. This was Costa’s 25th goal of the season and helped to keep him within three of league leader Cristiano Ronaldo.

Meanwhile, Real Madrid easily defeated Rayo Vallecano 5:0 to end their two match losing streak and stay in the title hunt. The Welshman Gareth Bale scored twice in the span of two minutes and earned an assist in the victory. In his first season with the club, Bale has been quite dependable for Real as both a goal scorer and set-up man. He has 12 goals and 12 assists in 23 league matches played.

Kaká scored twice for Milan in his 300th match with the club as they easily defeated Chievo Verona 3:0 on Saturday night. It has been a rough season for the Rossoneri, who are poised to finish mid-table and miss out on a place in either of Europe’s major club competitions.

With the title wrapped up in Germany, focus is now squarely on the remaining European positions available and the tight relegation battle. Borussia Dortmund managed to comeback from two goals down to defeat relegation threatened VfB Stuttgart 2:3. Marco Reus was in fine form, scoring all three goals in the win. This victory keeps Dortmund in second place, with a slender one point lead over Schalke 04.

Check it out the starting eleven of this FUT 14 Team of the Week 29:

The substitutes of this FIFA 14 Ultimate Team TOTW 29 are: 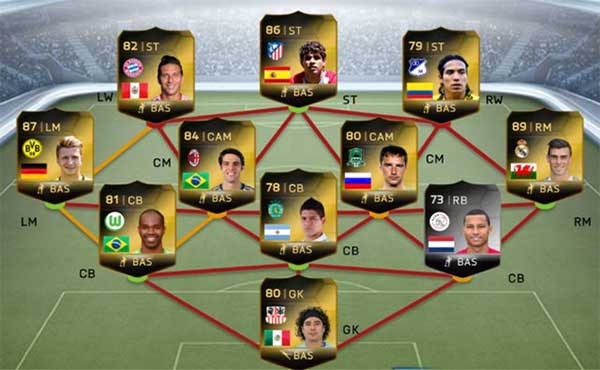