The third Team of the Week was released. Check out who is in the FIFA 14 Ultimate Team TOTW 3.

It is an amazing TOTW with several good players. The main highlight of this TOTW 3 is Robert Lewandowski. He scored two goals in the weekend, in the 5-0 win against Friburgo, and scored another two goals on Tuesday against Olympique Marseille. He is one of the three top-scorer players in Bundelisga, this season, and his team is in the top position.

If you are looking for a good Goalkeeper for your team, IF Diego Alves may be a great choice. Miranda, Hulk and Lukaku are all fast players that fit very well in most of the teams.

This week, no one got a rating improvement higher than two points.

Check it out the starting eleven of this FUT 14 Team of the Week 3:

The substitutes of this FIFA 14 Ultimate Team TOTW 3 are: 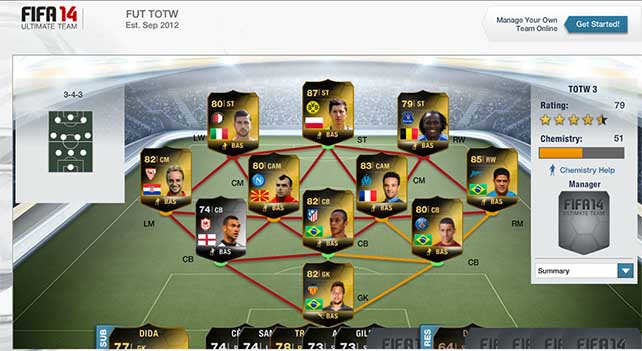