A new Team of the Week was released. Check out who is in the FIFA 14 Ultimate Team TOTW 30.

Manchester United’s Juan Mata scored only his second and third goals of the season, and helped set-up another in their 0:4 victory at Newcastle United on Saturday. Mata joined the club in January but has been fairly quiet until recently, now scoring in consecutive league matches for the Red Devils.

Every league fixture moving forward in La Liga is a must-win for Real Madrid, and they easily defeated Real Sociedad 0:4 in San Sebastián to stay in the title hunt. Four different Madrid players scored including defender Pepe, who notched his fourth goal of the season.

AS Monaco’s James Rodríguez had two goals and one assist in their 3:1 win over Nantes on Sunday. In his first year with the club, the 22-year old Colombian has nine goals and 11 assists in 30 league matches.

It was a wild one between the Portland Timbers and the visiting Seattle Sounders on Saturday afternoon that ended even at 4:4. Clint Dempsey earned a hat-trick for the Sounders, which included scoring twice in the final five minutes of regular time.

Check it out the starting eleven of this FUT 14 Team of the Week 30:

The substitutes of this FIFA 14 Ultimate Team TOTW 30 are: 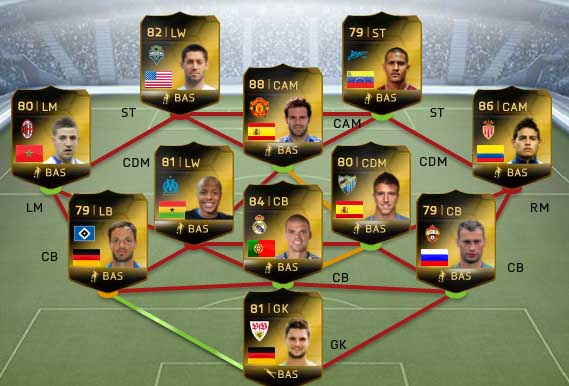