A new Team of the Week was released. Check out who is in the FIFA 14 Ultimate Team TOTW 31.

Liverpool’s 3:2 victory over Manchester City on Sunday puts the club in control of their first Premier League title. The match winner came in the 78th minute, when the 21 year old Philippe Coutinho latched onto the ball following a poor clearance attempt by the visitors. While it may have only been his fifth goal of the season, it could be the one their supporters remember in May if the club manages to lift the league trophy.

In Russia, Zenit St. Petersburg hold a slender one point lead over Lokomotiv Moscow with five matches remaining. On Saturday, they defeated Krasnodar 4:1 with Hulk scoring a hat-trick in the victory. This season, the Brazilian has 16 goals and will need to continue his fine form as the club face some tough opposition in the coming weeks.

Gonzalo Higuaínscored three times for Napoli as they took care of Lazio 4:2 on Sunday. In 31 league matches this season, the French-born Argentine has 17 goals and seven assists. Although Napoli look to have locked down third place in Italy, their fans will want the winning to continue as they face Udinese and Inter in the coming weeks.

Check it out the starting eleven of this FUT 14 Team of the Week 31:

The substitutes of this FIFA 14 Ultimate Team TOTW 31 are: 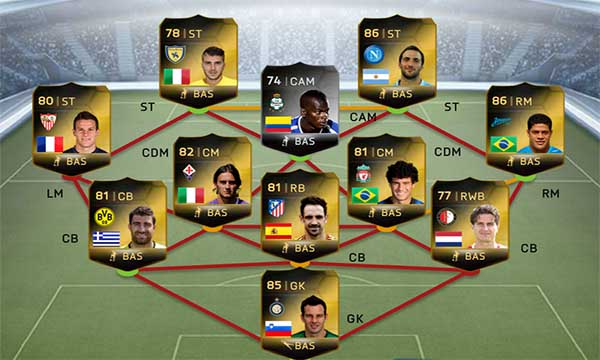