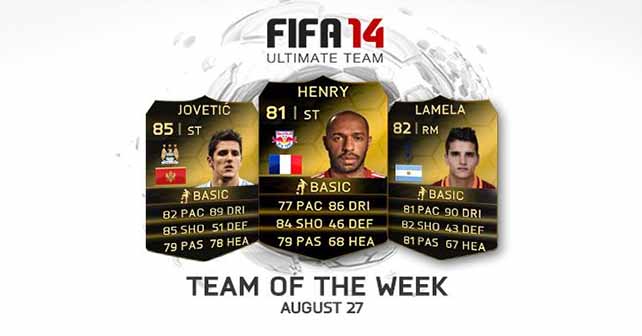 A new Team of the Week was released. Check out who is in the FIFA 14 Ultimate Team TOTW 47.

Thierry Henry had two goals and helped set-up another as the New York Red Bulls defeated the struggling Montreal Impact 4:2 on Saturday. The club currently holds the fifth and final playoff in the Eastern Conference, one point ahead of both New England Revolution and Philadelphia Union.

Manchester City comfortably disposed of Liverpool 3:1 on Monday night in one of the first big matches of the early Barclays Premier League season. The Montenegrin Stevan Jovetic scored twice for the hosts, first in the 41st minute then again in the 55th.

Erik Lamela helped set-up two of Tottenham’s four goals as they easily defeated newly promoted Queens Park Rangers 4:0 on Sunday. The 22 year-old had a fairly forgettable 2013/14 campaign, but has already doubled his assist output this season.

Check it out the starting eleven of this FUT 14 Team of the Week 47:

The substitutes of this FIFA 14 Ultimate Team TOTW 47 are: