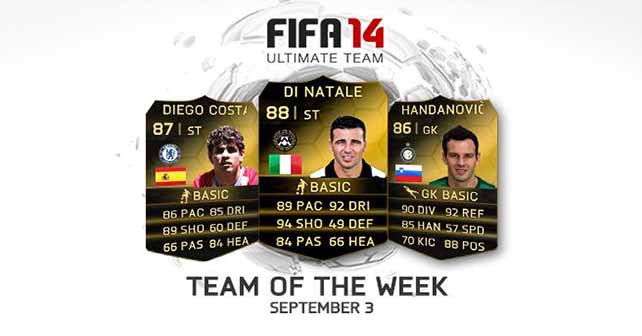 A new Team of the Week was released. Check out who is in the FIFA 14 Ultimate Team TOTW 48.

It may still be very early in the season, but Chelsea FC look absolutely incredible, especially after defeating Everton 3:6 on Saturday. Newly acquired Diego Costa bookended the scoring for the visitors. He opened the scoring in the the first minute of the match, then adding his second in injury time. After only three games, he sits atop the Premier League scoring standings with four.

This past weekend saw the start of the 2014-15 Serie A season. In Turin, a Samir Handanovič penalty save early in the match helped Inter salvage a 0:0 draw against their hosts Torino. While the visitors controlled a large majority of the ball possession, they just could not capitalize on the goal-scoring opportunities.

The 36-year old Antonio Di Natale continues to put the ball in the back of the net. His two second-half goals, five minutes apart, were enough to give Udinese a 2:0 victory over newly-promoted Empoli. While many were expecting Di Natale to retire over the summer, the Bianconeri supporters are glad they still have him playing upfront.

Check it out the starting eleven of this FUT 14 Team of the Week 48:

The substitutes of this FIFA 14 Ultimate Team TOTW 48 are: