Player Control is one of the core pillars of FIFA 15.

Leave defenders in the dust or control the ball like the world’s best footballers. Players explode into action with improved balance, cuts and closer touches when in possession, giving greater responsiveness and personality to the game’s superstars. Experience brilliant control as you keep the ball in a sprint or when searching for an opening in those close-touch situations.

Dispossessing your opponent is more rewarding than ever! Intercept and keep the ball with possession tackles and new shoulder barges. Feel the impact with big fall physics; shirt pulling will also be visible with enhanced cloth technology. FIFA 15 fundamentally changes the way you compete for the ball.

Ball physics are authentic. You’ll see better accuracy in the spin, curl and flight of the football as it moves realistically after each contact. In FIFA 15, the game evolves with astonishingly lifelike ball trajectories and spin while dribbling, passing, taking a touch, or blocking a shot. 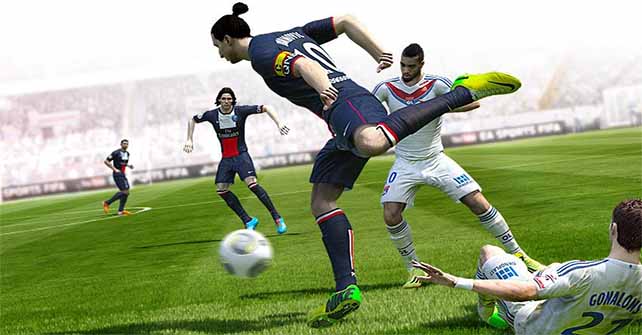 In FIFA 15, leave defenders for dust and use the ball like the world’s best footballers.

Players move realistically with athleticism, improved balance and closer control, giving greater responsiveness and personality to your favourite stars.
Run Touch Dribbling will let you keep the ball in a sprint or when looking for an opening in close-touch situations. Iconic players like Leo Messi will dribble and move like they do in real life.

The movement of the ball in FIFA 15 changes the game. You’ll see accurate spin, curl and flight of the football as it moves realistically after each contact. Experience authentic ball physics while dribbling, passing, taking a touch or blocking a shot.

In FIFA 15, the battle for the ball intensifies all over the pitch. Players are more physical and use Possession Tackles to win the ball and keep it – you are rewarded for good positioning and timing.
Feel the game with new shoulder barges and big fall physics.
Shirt pulling is also now visible with new player visuals and improved cloth technology.
You’ll command set pieces. Take control and position off-the-ball team mates during throw-ins, corners and free-kicks so they’re best placed to receive a pass and create attacking opportunities.