With over 12 million gamers and counting, Ultimate Team is the most popular game mode within EA Sports FIFA franchise. This year, FIFA 15 Ultimate Team takes the mode to a whole new level with fresh features such as Concept Squads, Friendly Seasons and more.

Let’s take a look at the new additions coming to FIFA 15 Ultimate Team:

Concept Squads
Think you know what would make a winning team? Concept Squads is a powerful new squad planning tool that allows you to plan future squads using the entire FUT player catalogue. Use Concept Squads to plan your next Transfer Market buys, find replacements for players, and test out different Chemistry combinations.

Friendly Seasons
The new Friendly Seasons mode lets you challenge your friends in a 1 v 1 version of the fan favourite Seasons format and track your stats. Win seasons to earn the current title holder position and the bragging rights that come with it!

Loan Players
In FUT 15 you’ll be able to try out some of the most highly sought after players in the game right away by signing them to your club on loan! Sign loan players for the set amount of matches and use them wisely during their loan contract’s duration to win a big Tournament Final or get the decisive win to clinch a Season Title. 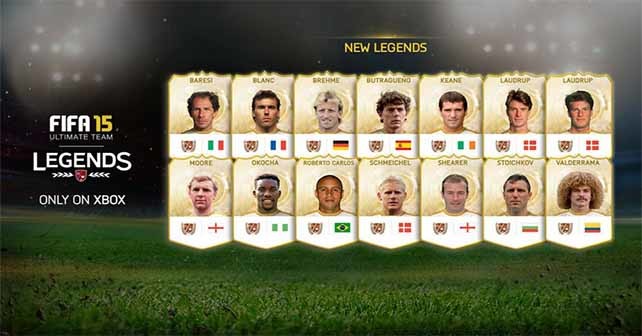 More Legends on Xbox
Achieve greatness on the pitch with the legends of the past and the stars of today! Check out the new Legends who will join the 41 from last year on Xbox 360 and Xbox One. Get ready to play with football greats such as Roberto Carlos, Peter Schmeichel, Alan Shearer, and Bobby Moore. This is your chance to build that squad you’ve always dreamed of!

New Base Attribute
PHY, which stands for “Physical”, is the new sixth base attribute in FIFA 15 that will be featured on FUT player items. It is a measure of key physical traits such as Strength, Stamina, and Jumping. PHY is important to FIFA 15 and FUT because it will help you determine a player’s ability to win physical battles across the pitch and keep their fitness throughout.
Although Heading was a great attribute to judge players by, PHY will have a more significant impact during a match. By paying attention to the players’ PHY attribute you’ll be better prepared to build your dream team in FUT 15 and beyond.