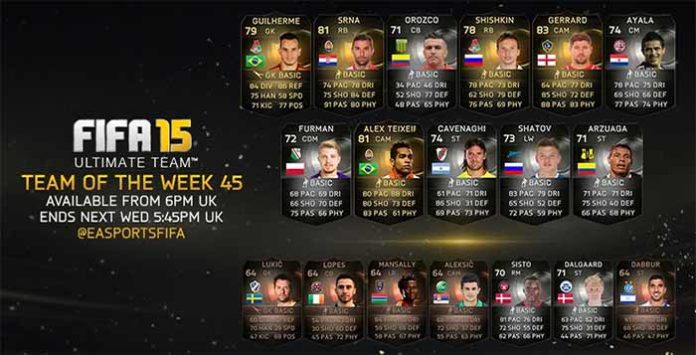 A new Team of the Week was released. Check out who is in the FIFA 15 Ultimate Team TOTW 45.

Steven Gerrard made his MLS debut in the California Clásico versus the San Jose Earthquake on Friday night. After conceding two early goals, the Galaxy proceeded to score five goals to win 5-2 in front of a capacity crowd. Gerrard managed to score his first goal for the club in the 37th minute then proceeded to set-up the go-ahead goal in the 64th.

Alex Teixeira scored both of Shakhtar Donetsk’s goals as they started their season with a 2-0 victory over FC Oleksandriya. Teammate Dario Srna helped set-up the first goal in the 23rd minute while Teixeira’s second came 10 minutes from time.

Guilherme had a clean sheet and Roman Shishkin helped set-up the match winner as Lokomotiv Moskva started their 2015/16 campaign with a 0-1 win over Mordovia Saransk.

Check it out the starting eleven of this FUT 15 Team of the Week 45:

The substitutes of this FIFA 15 Ultimate Team TOTW 45 are: