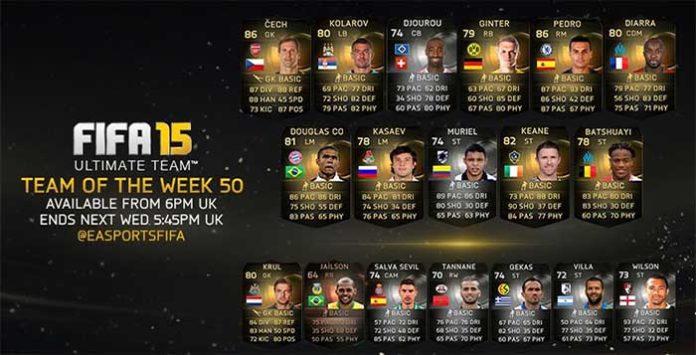 A new Team of the Week was released. Check out who is in the FIFA 15 Ultimate Team TOTW 50.

On Sunday, two goals and an assist from Michy Batshuayi and a goal and an assist from Lassana Diarra were just some of the offense as Olympique de Marseille defeated Troyes 6-0. This was Marseille’s first win of the season following two successive defeats.

Also on Sunday, newly acquired Pedro scored the opening goal as Chelsea FC won their first match of the season, defeating West Bromwich Albion by a score of 2-3.

Then on Monday, Petr Cech made eight saves as Arsenal and Liverpool played out to a 0-0 draw.

Check it out the starting eleven of this FUT 15 Team of the Week 50:

The substitutes of this FIFA 15 Ultimate Team TOTW 50 are: