The votes have been counted and Pink FIFA 16 FUTTIES in-forms were announced. Find out who won.

The FIFA community already picked the winners of the ten categories of FIFA 16 FUTTIES. The players names were unveiled this Friday at 3pm UK.

Check it out the eleven cards of this FIFA 16 FUTTIES:

There will be another three pink cards as rewards of the new FUTTIES Cup Tournament: Konoplyanka, Aubameyang and Marco Reus.

All nominees that won their FUTTIES’s category will automatically be upgraded to FUTTIES winner items. This means they will receive a stat boost and feature a golden trim around their items. This is a permanent upgrade in FUT 16. The nominee items have been removed from Packs and items that did not win The FUTTIES will stay in the game with their base stats. Look for the winner items in the Transfer Market. They will also be available in Packs until 6 pm, August 5, UK time. 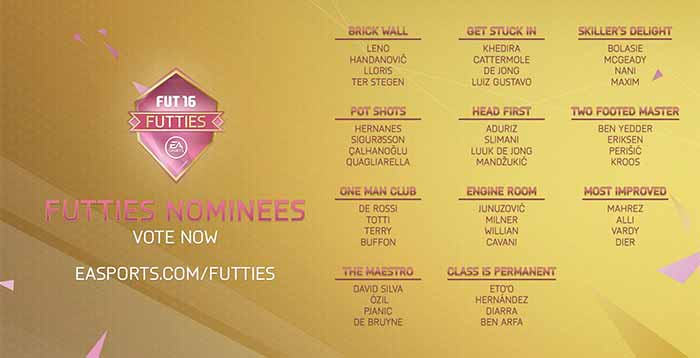