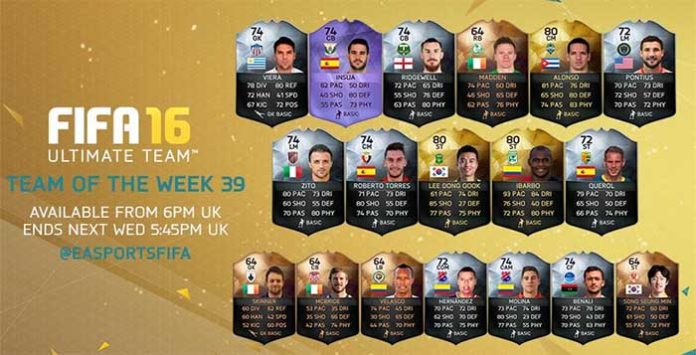 A new Team of the Week was released. Check out who is in the FIFA 16 Ultimate Team TOTW 39.

Osvaldo Alonso had an assist and played solid in midfield as the Seattle Sounders defeated the DC United 0-2 on Wednesday night. The win helps Seattle, who are struggling in the Western Conference, four points out of playoff spot.

On Saturday Insua’s 48th-minute goal was enough to help secure promotion to the Liga BBVA for CD Leganés, who defeated Mirandés 0-1.

Sebastián Viera of Junior Barranquilla finished Sunday’s first-leg match against Millonarios with a goal and a clean sheet, as his club won the game 2-0. Although they would lose the second-leg 2-4, they advanced to the semi-finals of the Torneo Apertura on penalties.

Check it out the starting eleven of this FUT 16 Team of the Week 39:

The substitutes of this FIFA 16 Ultimate Team TOTW 39 are: