A new Team of the Week was released. Check out who is in the FIFA 16 Ultimate Team TOTW 4.

On Saturday, Manchester City erased an early one-goal deficit, then proceeded to crush Newcastle United 6-1 at the Etihad Stadium. Playing the hero was Sergio Agüero, who scored five goals in the span of twenty minutes.

Then on Sunday, Mesut Özil had a goal and an assist as Arsenal comfortably defeated Manchester United 3-0. City’s win on Saturday kept them in first place while Arsenal’s victory on Sunday moved them up into second, two points behind the leaders.

That same day, Bayern Munich’s 5-1 victory over Borussia Dortmund continued their dominance in Germany. It was a complete team effort, featuring production from a number of players including defender Jérôme Boateng, who finished the match with two assists.

Check it out the starting eleven of this FUT 16 Team of the Week 4:

The substitutes of this FIFA 16 Ultimate Team TOTW 4 are: 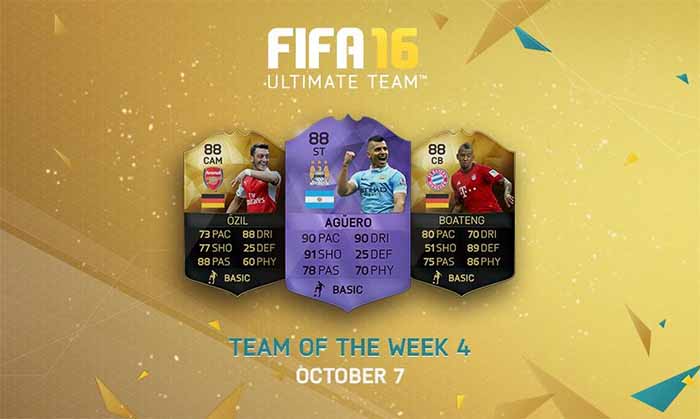