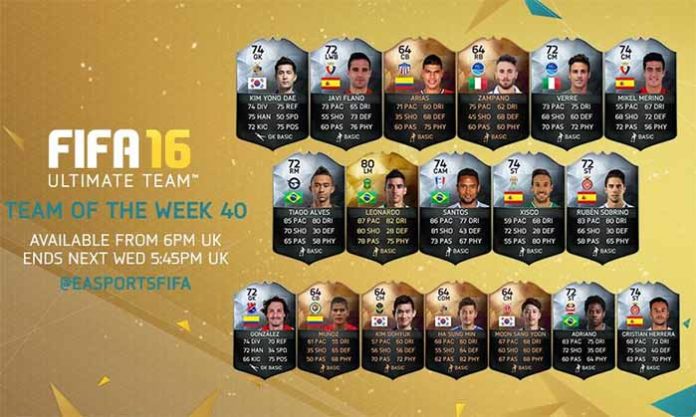 A new Team of the Week was released. Check out who is in the FIFA 16 Ultimate Team TOTW 40.

Santos scored twice, including one deep into injury time as the Suwon Samsung Bluewings managed a 2-2 draw against Incheon United. It looked like ncheon had won the match when they scored in the second minute of injury time, but Santos’ second goal only four minutes later gave each side one point.

There was also late drama in the match between Seongnam and Jeonbuk Motors, which ended 2-2. Leonardo’s second goal of the match looked to give Jeonbuk the win but Tiago Alves scored his second four minutes to tie the game. As it stands in the K-League, Jeonbuk lead the league with 27 points, while Seongnam sits in fourth place with 22 points.

In the Segunda Division play-offs, CA Osasuna is in the finals after they defeated Gimnastic 6-3 on aggregate. Mikel Merino scored three of his club’s goals in the two-legged series. In the finals, they’ll face Girona, who won their series against Cordoba 4-3.

Check it out the starting eleven of this FUT 16 Team of the Week 40:

The substitutes of this FIFA 16 Ultimate Team TOTW 40 are: