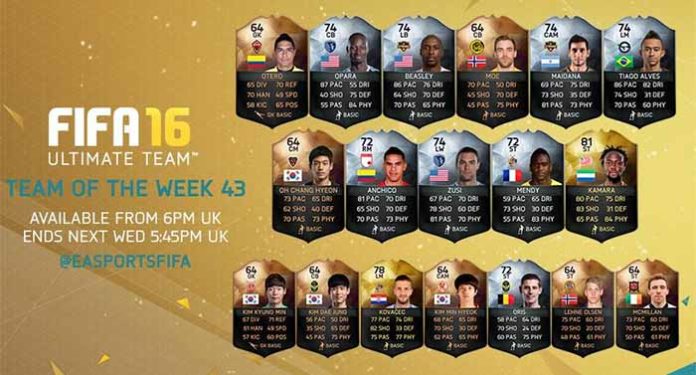 A new Team of the Week was released. Check out who is in the FIFA 16 Ultimate Team TOTW 43.

Tiago Alves scored the only goal of the match as Seongnam defeated Jeonnam Dragons 0-1 on Saturday. Seongnam has won their last two matches and now occupy fourth, one point behind third-place Seoul.

Although they ended up losing 3-2 to Montreal on Saturday, Kei Kamara earns a TOTW item thanks to his two-goal performance for New England. The two goals for Kamara were his first for the club since being acquired from Columbus in a trade earlier in the season.

Graham Zusi scored a goal and Ike Opara helped set-up the winner in injury time as Sporting KC squeaked by the Columbus Crew 3-2 on Sunday.

Check it out the starting eleven of this FUT 16 Team of the Week 43:

The substitutes of this FIFA 16 Ultimate Team TOTW 43 are: