A new Team of the Week was released. Check out who is in the FIFA 16 Ultimate Team TOTW 48.

In Saturday action in the MLS, Sebastian Giovinco scored three times as Toronto FC comfortably beat the New England Revolution 4-1. The win moves TFC into second place in the Eastern Conference, only a point behind leaders New York City FC.

Then on Sunday, Clint Dempsey earned himself a hat-trick as the Sounders took care of Orlando City SC by the score of 1-3. The win is huge for Seattle as they are eight points out of a playoff spot, with two games in hand.

The Eredivisie began this past weekend and on Sunday, Eljero Elia had three goals as Feyenoord crushed Groningen 0-5.

Check it out the starting eleven of this FUT 16 Team of the Week 48:

The substitutes of this FIFA 16 Ultimate Team TOTW 48 are: 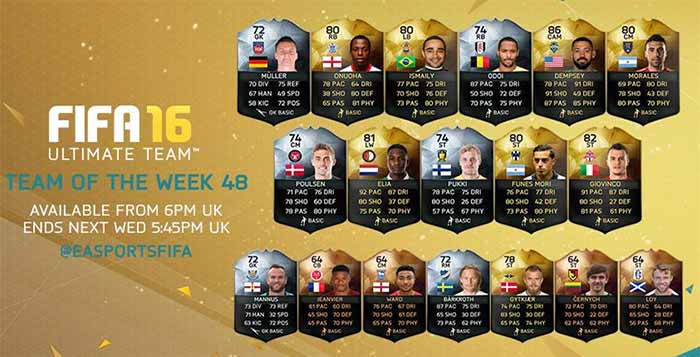