A new Team of the Week was released. Check out who is in the FIFA 16 Ultimate Team TOTW 7.

It was a busy Sunday, with all three of our featured players netting hat-tricks.

In the Premier League, Harry Kane scored three as Tottenham Hotspur defeated AFC Bournemouth 1-5. In 10 matches played this season, he has four goals.

In Germany, Borussia Dortmund took care of FC Augsburg by the score of 5-1. This time, Pierre-Emerick Aubameyang scored three goals for the hosts. He leads his club with 13 goals.

Then in Spain, Luis Suárez scored all three of Barcelona’s goals as they came from behind to defeat Eibar. Suárez has played in eight league matches this season and has seven goals.

Check it out the starting eleven of this FUT 16 Team of the Week 7:

The substitutes of this FIFA 16 Ultimate Team TOTW 7 are: 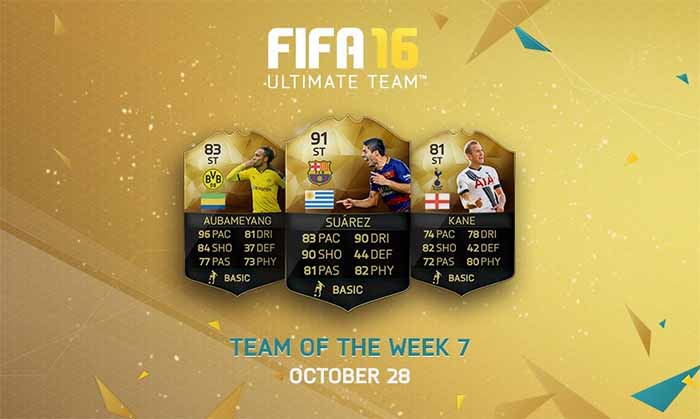