What is Set Piece Rewrite?
SR: Set pieces in FIFA had used the same system for many years and it was time for a change. We’ve looked at every aspect of set pieces in the game – free kicks, penalties, corners, throw-ins – to give players greater freedom and control in how they take them.
For example, our corner kick mechanics in FIFA 17 is very different from earlier years and feels really fun. There are now many more ways you can take a corner, leading to more scoring chances or other attacking opportunities.

Just how different are corners?
SR: First of all, the aiming is different. In the past, the longer you held a button, the further the ball travelled because of the added power. Now, using the left stick allows you to aim exactly where in the box you want the cross delivered. This works by moving a reticule on the screen that represents the target of your cross. Tapping the button results in a ball that has a loopy trajectory, good when aiming for the far post or taller players. However if you hold the button longer then you’ll have a more driven trajectory ball, for a near post move, or a flick on.
You can also switch to and control players in the box, which allows you to adjust where they are in the area. You can move them around to create greater space and a better attempt on goal. 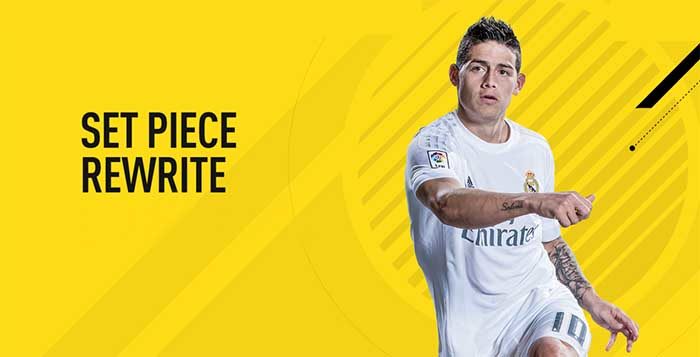 What about penalties?
SR: Penalties are really cool this year. You can now adjust your starting position and control how you approach the ball. Obviously the faster you approach the ball the more power you have in your shot. It’s also more likely you could mess up the shot, so there is a decision to make before taking a strike. When you power up you will have the same shooting mechanic as in regular gameplay – the longer you power up, the higher and harder the ball travels.

Is this the same for free kicks?
SR: Yes, it’s very similar for free kicks. You place yourself behind the ball where you want to start your run. Your placement behind the ball will affect the spin. The further back you go, the more power you can get in your shot. You can decide to shoot from the inside or outside of the ball to adjust your shot. As with penalties, the longer you hold, the more power and elevations you get in each shot.

What about throw-ins, anything new there?
SR: We have a few new thing with throw-ins. In the past, players did not have the freedom to move along the touchline. Now, the thrower can walk the line to gain a better position on the throw.
You can also do fake throws. This works in the same way as when you take a fake shot; you start your pass but a quick press of another button stops your throwing motion. This allows you to fake out your opponent and potentially pass the ball to an unmarked player.

If you want to know more about FIFA 17 Set Piece Rewrite, click here.