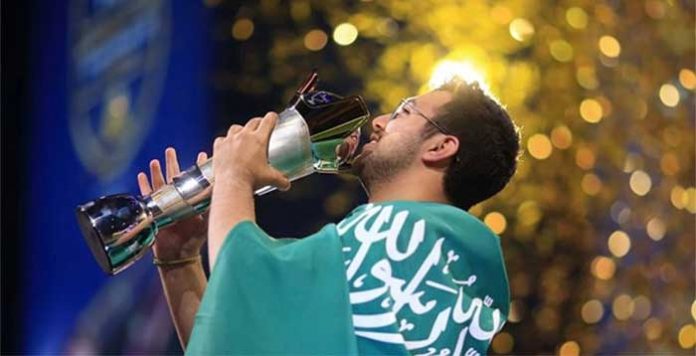 Over 20 million participated in qualifying. Thirty-two made it to the Grand Final. One lifted the FIFA eWorld Cup trophy. Mosaad ‘Msdossary’ Aldossary was proclaimed the EA Sports FIFA 18 eWorld Cup Champion after a 4-0 win on aggregate over Stefano ‘StefanoPinna’ Pinna at The O2 in London. ‘Msdossary’ looked in firm control throughout the final in front of a watching crowd at the iconic London arena, while many more around the globe watched the action unfold via live streams in four different languages. ‘Msdossary’, the winner of April’s FUT Champions Cup Manchester, claimed a staggering $250,000 USD prize, a trip to next month’s The Best FIFA Football Awards and, of course, the new FIFA eWorld Cup trophy. Let’s recap the Final Showdown, where a new world champion was crowned.

On one of his many masterful possessions, Msdossary jumped out to a 2-0 lead, surgically moving the ball down the field, crossing into the box and punching through a header. Msdossary’s first leg dominance was even more impressive considering it was the PlayStation 4 leg and he entered the tournament in the Xbox One division, his preferred console.

Leg two began with StefanoPinna with a two-goal deficit, and the competitors traded possessions without scoring until the 30th minute. Msdossary went up by an aggregate score of 3-0 goal of the match, and by minute 40, the Saudi Arabian had owned ball possession for 64 percent of the second leg to that point. Eventually, time ran low on StefanoPinna, and he couldn’t even find a way to score on a late-game breakaway. Msdossary knocked another goal in before the final whistle and pulled off the 4-0 victory.

As a diverse crowd filtered into the O2 Arena on the final day of the last day of the FIFA eWorld Cup Grand Final 2018, only four of the most elite FIFA 18 players on the planet remained in the tournament. With just three total matches left to play, on the line was $250,000 USD and a chance to be crowned the FIFA 18 World Champion. In the Xbox One division, the Grand Finalists set to face-off in the semis included Team Rogue’s Mossad “Msdossary” Aldossary representing Saudi Arabia and free agent repping Malta, Kurt “kurt0411” French. From the PlayStation 4 division, the two men left standing were ECV Esports pro Stefano “StefanoPinna” Pinna representing Belgium and Manchester City’s Denmark pro Marcus “Marcuzo” Jorgensen.

All four players advanced to Day 3 of the tournament after surviving three gruelling stages of gameplay on Day 1 and Day 2 including the group stage, knockout stage, and quarterfinals. Endurance and stamina are key factors in what separates the best football players in the world from the rest, and it’s no different when it comes to professional FIFA 18 competitors.

Heading into the match, kurt0411 seemed to be the favourite given his insane Day 2 performance. He racked up more goals than any other competitor in the tournament, including a remarkable 47 aggregate scores in his final two group stage matches and his knockout and quarterfinal contests. But Msdossary had other plans. After kurt0411 went up 2-1 in the first leg of the match nearing halftime, Msdossary took the wind out of his opponent’s sails with a goal in minute 45, and that goal seemed to be a major momentum shift and turning point in the match. Msdossary didn’t let up his attack, but masterfully ran down the clock by keeping the ball away from his opponent. He scored twice more with no answer and ended up defeating kurt0411 by an aggregate score of 8-3, shutting out his foe from Malta in the final leg to earn a seat in the grand final match.

Enjoying a meteoric rise in competitive FIFA gameplay over the last few years, Manchester City’s Marcuzo strutted onto the stage with his golden locks flowing. Following Marcuzo to the stage, his opponent and competitive circuit newcomer StefanoPinna who stood as the only completely undefeated competitor to this point in the tournament, a phenomenal feat in its own right. Marcuzo jumped out to an early 2-0 lead in the first leg of the match on the heels of a couple of beautiful goals. StefanoPinna missed out on a crucial penalty kick, but somehow his opponent guessed correctly and made the save. The Belgian competitor finally broke through in minute 85 to put the score at 2-1 heading into the final leg. The competitors traded off failed attacks until Marcuzo, on a counter-attack, booted a laser in from the top of the box, and he pumped his fist in celebration. StefanoPinna missed out on several ideal scoring opportunities but finally put one in to cut Marcuzo’s lead to 3-2 at halftime in the final leg. As Marcuzo watched the match highlights on the big screen during the break, both competitors were clearly locked-in. After battling for a bit, StefanoPinna put in an equalizer as the crowd inside the O2 Arena erupted and the scoreboard read an aggregate 3-3, and the match headed to extra time. As the atmosphere intensified, both men looked exhausted. They wiped their faces, sipped some water, and regained their focus. With a mere eight in-game minutes left to play in the extra time period, StefanoPinna blasted through a masterful goal to take the one-goal lead, and the crowd cheered loudly as the Belgian displayed his excitement. At this point, Marcuzo was clearly distressed, knowing his chance to win was fading. After one final push that was called offsides, the final whistle blew, and StefanoPinna reigned as the PlayStation 4 champion and advanced to the final to face Msdossary.

When the curtain fell on the FIFA eWorld Cup Grand Final 2018 in London, it was Saudi Arabian 18-year-old Mossad “MSdossary” Aldossary who was crowned FIFA 18 World Champion after asserting his dominance on the tournament’s field of remaining competitors. The Team Rogue pro hoisted the trophy with gold glitter falling behind him, his home country’s green flag draped over his back, as he smiled out into the arena of cheering fans and kissed the trophy.

Msdossary had a phenomenal day on the sticks, closing out his final set of matches with three clean sheets to earn the title of FIFA eWorld Cup Champion and take home the $250,000 USD top prize. “The days before I came here to London, I was just training. And I didn’t think too much about whether I’ll be champion or not,” he told EA SPORTS in a post-game interview. “The most important day is the last day. It’s hard when you finish the second day and you have one remaining final the next day. I think that not everyone could focus one-hundred percent, by that point.” No stranger to hoisting FIFA 18 tournament hardware, Msdossary also won the FUT Champions Cup Manchester back in April. And it was his experience in high-pressure situations that ultimately won him the title.

His opponent, Stefano “StefanoPinna” Pinna, a Belgian newcomer to the competitive FIFA circuit represented by ECV Esports, had his own impressive run to the final, but was unable to score a single goal against Msdossary in the final showdown match.