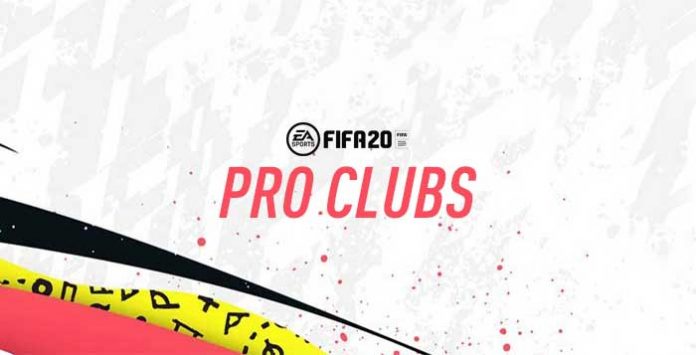 FIFA 20 Pro Clubs allows you to create or join a virtual club with your friends and play online matches using your Pro player that you created in Career Mode and play 11 v 11 games. Let’s find out what is new this year.

The New Features of the FIFA 20 Pro Clubs

FIFA 20 has a new Avatar system that replaces player creation across the entire game which includes Pro Clubs. This feature brings new ways to design your Virtual Pro’s visual characteristics via an improved 4 quadrant axis morphing tool which not only allows you to morph and define each facial feature to your liking but to also go further than ever with added morphing options and skin tones.

This new system also provides all the features from the previous Virtual Pro system (from commentary name to updated goalkeeper gloves to set your preferred celebration/set-piece styles). But EA says that they know that creating a player doesn’t only consist of making sure they “look right”, and that you have been requesting new positions for your Virtual Pros to play in to give you more control of the way you develop your game on the pitch. In FIFA 20, from community feedback, EA has added back the following positions: LF/RF, LM/RM and RWB/LWB.

These newly added positions are also accompanied by a revitalized player progression system within FIFA 20, where choosing between different positions, heights and weights will now have a deeper impact on how your Virtual Pro moves and feels, with these choices affecting all of your Pro’s physical attributes.

Stamina has also been reviewed and EA have tuned the values to create a risk vs reward system – if you invest in stamina and pace, you will sacrifice other attributes for your pro. All players will start their Pro Clubs experience at an 80 overall rating. From here, progression is earned through Drop-In, League, and Cup Matches, with the remainder coming through player traits, which have also been revamped.

There are over 30 additional traits for FIFA 20 that, if paired together with specialty traits, will allow you to take customisation to the next level. They offer increased benefits to your pro, but at an increased cost and a potential effect on other attributes.

EA Sports have worked on re-branding the mode for FIFA 20 to add to the immersion you feel when experiencing a Pro Clubs match. In FIFA 20, EA implemented broadcast features such as replay transition wipes, an on-screen watermark, club banners and a new Pro Clubs logo. The club banners are influenced and defined by a team’s primary and secondary colours, and show the name of the club in the stands. Stadiums that support banners will display both home and away club banners throughout the matches.

EA also added AR (augmented reality) overlays to match intros, half time, and goal scores to enhance your broadcast match experience. In addition to this, match types in Pro Clubs will now feature unique broadcast colours to distinguish the mode between Friendly, Cup, and League matches.

There are new ways to play Pro Clubs this year:

House Rules Cups takes the popular House Rules from FIFA’s Kick-Off mode and brings them into Pro Clubs. Replacing the old cups, House Rules Cups will rotate a match type every day of the week, with a different cup playable each weekend. The schedule is visible in-game so you’ll never miss your favourite cup.

Practice Match allows for Clubs to practice individually or as a team against varied AI difficulties, from beginner to legendary. In addition to the available difficulties, you can set which tactics you want to play against (i.e. Possession based or High Pressure) and what overall rating you want your AI opponents to be, from 80 rated all the way to 99 overall rated players.

EA say that they know that this has been a highly-requested feature in Pro Clubs and consider this to be a valuable first step, as EA look to the future of Pro Clubs.

In addition to all the new Gameplay Features coming for FIFA 20 – which will all be present within Pro Clubs – the team has also focused on tackling some of your frustrations to give you a better overall experience.

Some of the main ones that have been tackled in FIFA 20 Pro Clubs are as follows:

‘Any’ Stamina Bug – Stamina drained faster for the player controlling the ‘Any’ position
CB in wall – The game now places taller forwards and midfielders in the wall to defend against Free Kicks
GK Set Piece – Having a GK as captain will no longer affect game stability when your team has a set piece to take
Club Trophy Celebration – Clubs can now watch the full Cup Celebration when you win
Another hot topic in the Pro Clubs community is Kit Clashing. This year EA has added over 25 new customizable kits and over 150 crests to choose from. Alongside these additions, EA has also added a Pre-Match Kit Select for all Pro Club matches. Once a match is found, the team captains can pick what kits their team will see locally for the upcoming match. The kits displayed represent what both teams currently have selected as their default home and away kits. The Pre-Match kit selection will work with our kit clashing logic in unison to help deliver the best experience, free of kit clashing for players.