The first offers of the Road to the Final event are out!

Road to the Final items are back in FIFA 20 Ultimate Team. The UEFA Champions League Road to the Final has begun. Follow the journey in FUT 20 with live dynamic Player Items that upgrade based on teams’ progress through the world’s most prestigious club competition. In this first of two weeks, you can get live items in packs, dynamic objectives and SBCs.

Here is the list of RTTF players available in packs from November 08 to November 15, 2019. 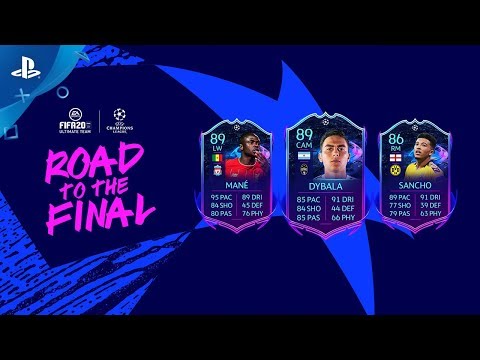 Q: Does a player need to play matches for their club to get an upgrade?
A: No, Road To The Final players do not need to be selected or have played in each stage to receive an upgrade.

Q: What happens if the player’s team finishes 3rd in the UEFA Champions League group stage?
A: The Player Item will be updated to a UEFA Europa League: Road To The Final item, they will not receive an upgrade for advancing to the knockout stage but will continue to receive upgrades if their club advances in the UEFA Europa League.

Q: How long will it take for the attribute boost to be applied to a player item when a shift occurs?
A: Road To The Final items can take up to a few days to update in-game.