FIFA 21 is the latest EA Sports FIFA title and, if you are fan of this franchise, you will not want to lose the chance to play it. While the game is not out, the best you can do is to read the FIFA 21 Official FAQ and find out how it will be.

When do I need to redeem by?
The Dual Entitlement offer will let you upgrade your copy of the game at no extra cost up until the release of FIFA 22.

Will my progress on PlayStation 4 and Xbox One carry over to PlayStation 5 and Xbox Series X?
All progress you make or content you acquire within FIFA 21 Ultimate Team (including players, items, coins, FIFA Points, match record, and leaderboard placement), as well as all progression in VOLTA FOOTBALL will transfer from PlayStation 4 to PlayStation 5 and back, or Xbox One to Xbox Series X and back.
Progress within all other modes including Online Seasons, Co-Op Seasons, Career Mode, Pro Clubs, etc. will be specific to the console you are playing on and won’t transfer between consoles.

Do I need my PlayStation 4 or Xbox One FIFA 21 disc to play on PlayStation 5 or Xbox Series X?
FIFA 21 on PlayStation 5 and Xbox Series X will be a digital version of the game which you’ll be able to download once the game launches later this year. If you buy a physical copy of FIFA 21, you’ll need the disc to be inserted into your PlayStation 5 or Xbox Series X to be able to launch FIFA 21 on those consoles. If you intend to buy a discless console, you will need to purchase FIFA 21 digitally to take advantage of the Dual Entitlement offer as physical discs cannot currently be used to upgrade to discless consoles.

Who is the ‘Cover Talent’ loan item?
We’re not confirming who’s joining the exclusive list of EA SPORTS FIFA cover stars just yet, but we can say they’ll be a big boost to your FUT Club! 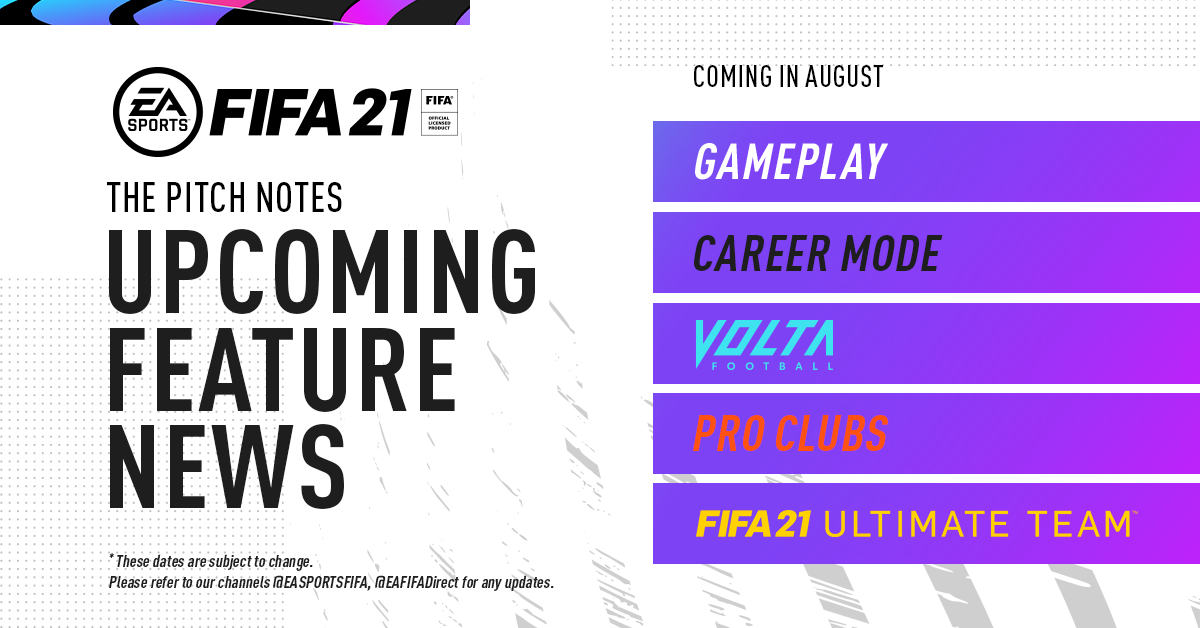 PC and Other Platforms

Which version of FIFA 21 will be available on PC?
FIFA 21 on PC will be the same version as released on PlayStation 4 and Xbox One.

Will FIFA 21 be available on other PC platforms aside from Origin?
You’ll also be able to pre-order and play FIFA 21 through Steam, as well as Origin on PC.

When will FIFA 21 release on Stadia?
We’ll release more information about FIFA 21 on Stadia later this year.

What will be included in FIFA 21 on Nintendo Switch?
The FIFA 21 Legacy Edition on Nintendo Switch features the latest kits and squad updates for the upcoming season, updated presentation (in-game menus and broadcast overlays), but no new game modes or gameplay innovations.

Is there any news on cross-play?
Allowing our players to play against each other on whichever platform they play EA SPORTS FIFA is a long-term goal of ours. At this moment we don’t have any news, but we’re continuing to investigate its integration and will share any updates when we have them.

What about any changes to the 2020/2021 football season? Will these be reflected in FIFA 21?
We remain in constant communication with our club and league partners around the world to understand the impact of COVID-19 on the footballing landscape. We will continue to liaise with them in the coming months as they work through their plans for the upcoming season.