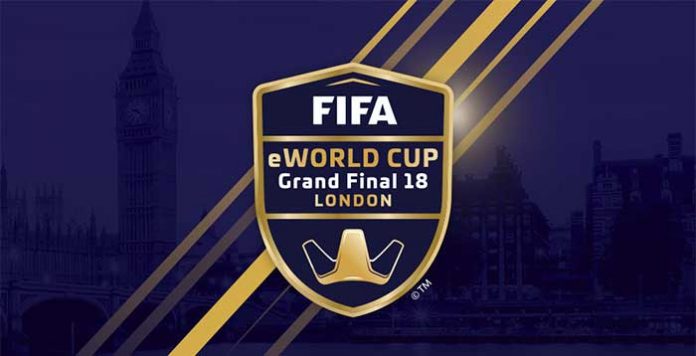 What to expect from the FIFA eWorld Cup Grand Final 2018? Let’s find out.

It’s been a long, hard-fought journey to the pinnacle of competitive FIFA, the eWorld Cup Grand Final in London. For some of the 32 players, it was a bit more straightforward. Qualify for one of the FUT Champions Cup tournaments via FUT Champions, earn a record that qualifies you for the Global Series Playoffs, then make it to the final 16 to book a spot in the Grand Final. But other players made it to the Playoffs via less direct routes, such as local qualifying tournaments. Learn more about some of those events and who qualified from them below.

FUT Champions Cup (Barcelona and Manchester)
These were the two official tournaments that players used to qualify for the Global Series Playoffs. Players who were in the top 64 in the FUT Champions global leaderboards in FIFA 18 during a specific month (November 2017 for Barcelona and February 2018 for Manchester) were eligible to qualify for each tournament.
The players who made it to the console quarterfinals (top eight players on each console) of each FUT Champions Cup qualified for the Global Series Playoffs. There was also a $20,000 prize at stake in the final of each tournament, which was played between the winners of each console final.
Winners: Donovan “DHTekKz” Hunt (Barcelona), Mossad “MSDossary” Aldossary (Manchester).

FIFA 18 Global Series Playoffs (Amsterdam)
Including the 16 players from each FUT Champions Cup event, 128 total players (64 on each console) qualified for the Global Series Playoffs in Amsterdam. A number of league partners, licensed qualifying events, and more contributed the rest of the Playoff contenders. Those who managed to get past the round of 32 all qualified for the FIFA eWorld Cup Grand Final.
Winners: Nicolas “nicolas99fc” Villalba (PlayStation 4) and Michael “MegaBit” Bittner (Xbox One)

eLigue 1
Winner: Fouad “Rafsou” FaresTeams: Clubs are from Ligue 1, the French first division.
Eligible Countries: France
Number of Competitors: 40 (20 Xbox One, 20 PlayStation 4)
Qualification: Teams host online qualifiers to select their competitors.
Spring and Winter Finals: These are two separate events in which all signed competitors for each team compete and a champion of both the Spring and Winter Final is crowned on each platform.
Final Event: The Spring and Winter Finals champions (four competitors total) on both consoles play against each other to deem an overall champion.Rafsou beat top players like eWorld Cup Grand Finalist Corentin “Maestro” Thuillier to win the title.

eDivisie
Winner: Dani “Ajax Dani”
Teams: Clubs are all from the Eredivisie, the Dutch first division.
Eligible Countries: Netherlands
Number of Competitors: 23 (some teams have one player that plays on both consoles, other teams have two signed players)
Qualification: Teams sign players for the competition.
Regular Season: 17 games played, broadcast once a week until finals.
Final Event: Knockout rounds (eight players, four Xbox One and four PlayStation 4) to determine the winner. Dani beat PSV’s Aaygun96 to win the title.

Virtuelle Bundesliga
Winner: Tim “TheStrxnger” Katnawatos
Teams: Players select Bundesliga clubs in qualification, but they don’t have to be ”signed” by the clubs.
Eligible Countries: Germany
Number of Competitors: 24 (12 Xbox One, 12 PlayStation 4)
Qualification: In-game qualification mode where each player selects their Bundesliga club and competes throughout the season. Every month, the top players on each console qualify for one of four playoff tournaments.
Playoffs: 128 players enter the playoffs, but only eight on each console qualify for the final tournament.
Finals: Typical tournament format between 24 total players: 16 that qualified from the playoffs, the defending Virtuelle Bundesliga champion, and five wildcard winners. Played at the German Football Museum in Dortmund. TheStrxnger beat Cihan in the final to win the title.