The community asked new legends and they gave it to us. There are fifteen new legends coming to FIFA 15.

Achieve greatness on the pitch with the legends of the past and the stars of today! Check out the new Legends joining the existing 41 Legends on Xbox One and Xbox 360. Get ready to play with football greats such as Roberto Carlos, Peter Schmeichel, Alan Shearer, and Sir Bobby Moore. This is your chance to build that squad you’ve always dreamed of!

Do you want to know exactly who are the fifteen new legends that are coming to FIFA 15 ? Here they are: 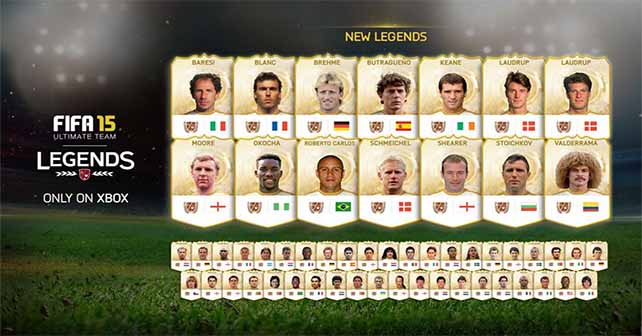 These fifteen new legends will be added to the old ones:

Romario is not in this list because due to license issues he was removed from FIFA Legends.

As you probably already know, Legends will remain exclusive to Microsoft consoles Xbox 360 and XBox One. If you have plans to play FIFA 15 with one of the more than 50 Legends, and you are a owner of a Playstation, you will have to change your console.

The announce of the new legends was made during the Microsoft Conference on Gamescom.