The first reviews of EA Sports 2014 FIFA World Cup are out.

Let’s take a look to the opinion of the specialized press about the new EA Sports FIFA title:

“… a marked improvement over the (FIFA 14) PS3 and Xbox 360 iterations.”
“An authentic and exhaustive interactive memento of what’s promising to be a memorable tournament.”
“For the debutant there’s a new, lower difficulty level and integrated tutorials for, what Prior says, is “the most accessible FIFA ever made.”

“While talk of accessibility is often associated with the dreaded notion of “dumbing down”, here it appears to be what the development team is adding, rather than what it’s taking away, that’s set to define the latest FIFA title.”

“Legitimately the most feature-rich of any of EA Sports’ standalone tournament tie-in games.”

“EA Canada has put together a more forward-thinking footy game…”
“Even the Brandenburg Gate and Trafalgar Square feature, as the build up to each game shows supporters partying at a Fan Fest back in their home nation. Important, lifelike detail.”

“Even the managers get a look-in. They’re properly modelled and licensed, which adds a nice level of detail.”

“This World Cup tie-in from EA Sports offers the usual accuracy and detail as well as vital game play improvements.”

“This World Cup tie-in from EA Sports offers the usual accuracy and detail as well as vital game play improvements.”
“It adds up to a much more action-packed, and therefore often frantic, experience than last year’s Fifa 14 – whichever console you played it on. But while the gameplay can be described as arcade-esque, the trimmings surrounding what happens on the pitch are anything but.” 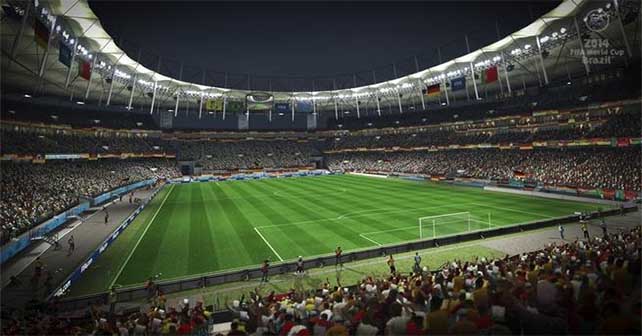