Now that FIFA 20 has hit the shelves, how will you start your new game? Are you going to lead your favorite team to glory in Career Mode, take to the streets in VOLTA or simply battle your friends in a straight one-on-one match?

The choice is yours, but of course, it won’t be long before most players get stuck into Ultimate Team and start building their own ‘invincibles’ line-up.

The great news is that FUT 20 is back and bigger than ever, and as usual you can get your hands on packs using your coins or FIFA points. Who will you find when you open your packs? This will largely be determined by which type of pack you purchase, but with EA promising plenty of first-class talent in both regular and free packs, you can build a talented squad on a shoestring budget.

There are few feelings quite like the anticipation of opening a new pack, and it is the ‘instant win’ feeling that makes FUT such an attractive game mode compared to the more isolated pursuit of a single-player career.

The immediacy and the buzz surrounding FUT pack openings remains part of the game that never fails to garner a healthy amount of excitement. The ‘wait and see’ aspect of FUT remains a staple in FIFA gaming, with the activity resembling a similar buzz to peeling back the foil on scratchcards.

Indeed, when looking online scratch cards are categorised as ‘instant win’ games by operators, with lots of different sites offering ‘scratchies’ with considerable jackpots; with the feelings they evoke being parallel to landing a big name from your Ultimate Team packs.

With that in mind, we have come up with what we believe to be the ultimate FIFA 20 five-a-side team, that would surely make your heart skip a beat or two if they walked out from behind that badge. So, without further ado, let’s get on with revealing who makes the grade.

#1 – Virgil van Dijk
You can have all of the best attacking players in the world but without a beast of a centre back, your team will be vulnerable at the other end of the pitch.
So that’s why we’ve got fingers, toes, and everything else crossed that we reveal Virgil van Dijk in one of our FUT packs.
With ratings of 90 for defending, 86 for physicality, and 77 for pace, there’s beauty and brains to the Dutchman’s game, and he is the perfect foundation on which to build the rest of your team.

#2 – Neymar
A surprise pick, perhaps, ahead of Messi and Ronaldo, but Neymar is arguably a more rounded player as far as FIFA 20 is concerned.
That’s because he’s got five stars for his weaker foot, which means when you are one-on-one with an opponent you can go to either side and get a good shot away. 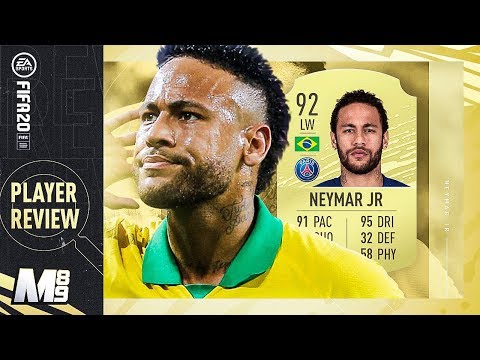 Neymar is quicker than the two legends mentioned above plus has a better dribbling stat than CR7, while his five-star skill moves will be enough to drive your friends to distraction.

#3 – Kevin de Bruyne
The improved game mechanics in FIFA20 mean that flair players come to the fore just as much as those quick and strong beasts that the series has become famed for.
That really helps players like Kevin de Bruyne, who might not be blessed with speed or stamina but who brings plenty to the party nonetheless.
It’s his passing that you will really love; the Belgian seems to have a ball on a string, and with a quick striker and wingers you can ping aerial through-balls and easily get in behind your opponent’s defence.

#4 – Marc-Andre ter Stegen
The best-rated goalkeeper on FIFA20 is Atletico Madrid’s Jan Oblak but,], for our money, it is the Barca man who you want popping up in your packs.
Let’s look at the facts: the German boasts better stats in diving, reflexes, and kicking. So, not only is he a shot-stopping behemoth, he can also be relied upon to launch quick counter-attacks with his trusted right boot.
A good keeper can make a big difference in FIFA, and ter Stegen is as good as they get.

#5 – Kylian Mbappe
When the young French star gets hold of the ball, it is quite some task trying to get it off him.
With 96 pace and 90 dribbling, if you pair Mbappe with Neymar in attack – as PSG have the pleasure of doing week in, week out – you really will take some stopping.
And with de Bruyne pulling the strings in midfield, and with van Dijk and ter Stegen tidying up behind, this could be the year where your Ultimate Team rules all before it!