France triumphed in a fantastic finale at the inaugural FIFA eNations Cup™ 2019 in London to be named the top national team on the planet. The European side – consisting of ‘Maestro’ and ‘DaXe’ – defeated South American giants Argentina in the showpiece decider to cap a pulsating tournament. In the first competition of its kind, where players represented their country in an official capacity for the first time, twenty nations across six confederations were narrowed down to one. It means France can now boast to being the home of the best national team competing on EA Sports FIFA 19, as well as the 2018 FIFA World Cup Russia™ winners.

Only two nations – Argentina and Brazil – had secured their places in the knockouts on the opening day, meaning Sunday kicked off with a plethora of enticing final group matches. There was drama from the off when Finland stunned Saudi Arabia’s ‘MsDossary7’ and ‘The Royal’ by earning two draws in the 1v1, which eliminated Saudi Arabia from the tournament as England and France progressed from Group A. France, Mexico and Denmark endured the agony of having their fate decided by other matches on Sunday after playing all their group games the previous day.

All progressed to the knockouts, however, after another thrilling round of final group games. Perhaps the most dramatic moment of the fifth round was Portugal’s injury-time winner – coming from compatriot Cristiano Ronaldo, no less – against Australia in the 2v2 which sent them top of the tightly-contested Group D and sparked wild celebrations in the gaming area.

The quarter-finals witnessed some classic on-field rivalries played out on the virtual pitch as England faced Argentina, while Spain met neighbours Portugal. The former produced something of a shock when Argentina advanced at the expense of the hosts after ‘Yagocai’ defeated Xbox top seed ‘F2Tekkz’ 2-0, while the Iberian derby was separated by a tense penalty shoot-out after the 2v2 stalemate – sparking more animated celebrations from ‘Tuga810_’ and ‘RastaArtur’. Denmark and France, meanwhile, showed why they were among some of the pre-tournament favourites by advancing to the final four.

PlayStation No1 ‘Nicolas99fc’, nicknamed ‘the Iceman’, displayed his typically composed style by winning his 1v1 match against ‘Marcuzo’ 3-2, while team-mate ‘Yagocai’ followed up by winning his match against ‘Ustun’ by the same scoreline. Portugal’s valiant run came to an end against France. After navigating through the especially tight Group D and beating rivals Spain, they suffered defeat against French duo ‘Maestro’ and ‘DaXe’ – the former celebrating à la compatriot Kylian Mbappe. 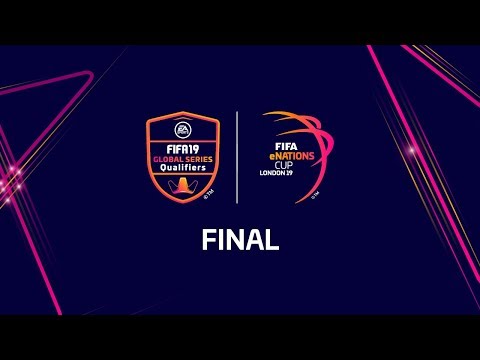 A mammoth meeting between Argentina and France began with ‘Nicolas99FC’ taking on ‘Maestro’ in the PlayStation first leg. After the anthems were played and the players strapped in with controllers in hand, a chess-like game ensued between two seasoned players which ended in a 1-1 draw.

With the first leg ending in a stalemate, it set up a winner-takes-all second leg on Xbox with the weight of expectation lying on the shoulders of ‘Yagocai’ and ‘DaXe’. Playing with his usual possession-based style, France’s ‘DaXe’ opened the scoring – through Mbappe, no less – in the first half before doubling his lead after the break. ‘Yagocai’ got a goal back to ensure a nervy finish for ‘DaXe’ but the Frenchman remained composed, seeing out the victory.

‘Maestro’, one of the winners, said that “It feels great to win the first ever FIFA eNations Cup with my brother. It’s crazy! I want to thank the French Football Federation. Everybody worked hard for us to be in good condition and we’re very grateful for that“. His brother ‘DaXe’ was also very happy: “I’m very happy we’re able to give France the first ever FIFA eNations Cup, it’s an amazing moment to win it. ‘Yago’ is so good, he beat Tekkz earlier in the tournament. We never play a final – we win a final. We did the job. Allez Les Bleus!“