Find out who are in the FUT 13 TOTS players of Eredivisie & Belgian PL.

The new FUT 13 TOTS of the Eredivisie & Belgian PL is: 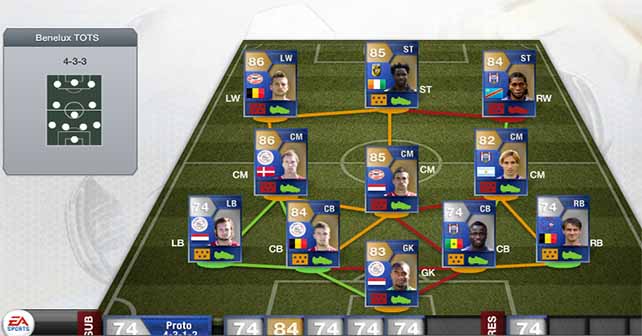 The FUT 13 TOTS of the Eredivisie & Belgian PL was released on Friday June 7th and it is available in packs between June 7th 6pm (UK time) and June 10th 5:30pm.

This Team of the Season will be available in packs at the same time that the TOTS of Ligue 1. It means, that you may find TOTS cards of any of these three leagues in the packs you open until June 10th.

Ajax and Anderlecht are the teams with more players in this TOTS. Both made a great season, finishing in the first place of their leagues and renewing the champion title of the last year.

A new FUT 13 Team of the Season will be released on the next Wednesday. Don’t lose this chance to improve your FUT 13 squad with the best players. Buy them on the auction market or get them on packs.

We will continue to bring you everything about the TOTS. Stay with us.